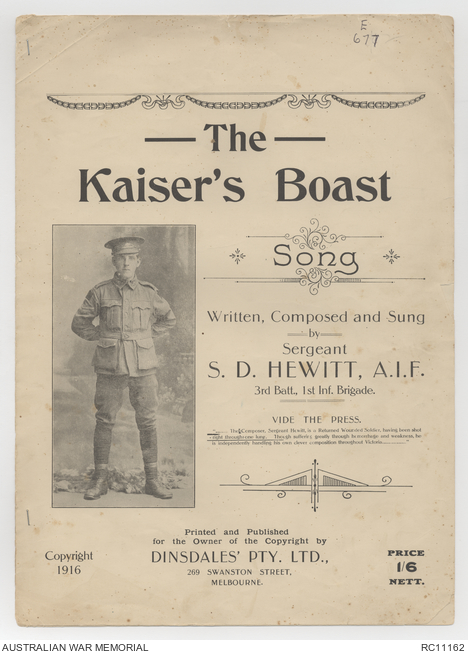 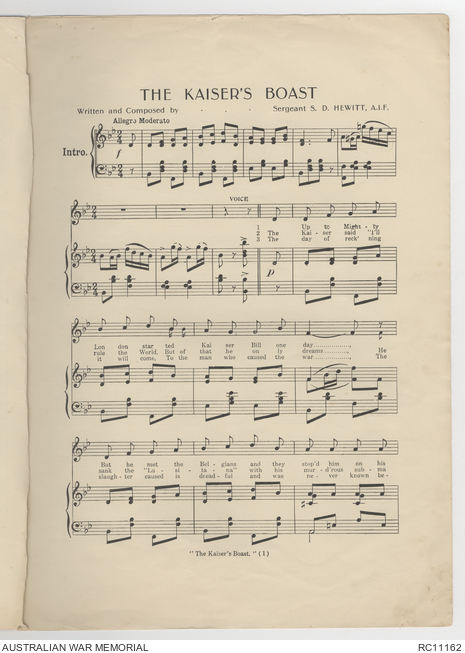 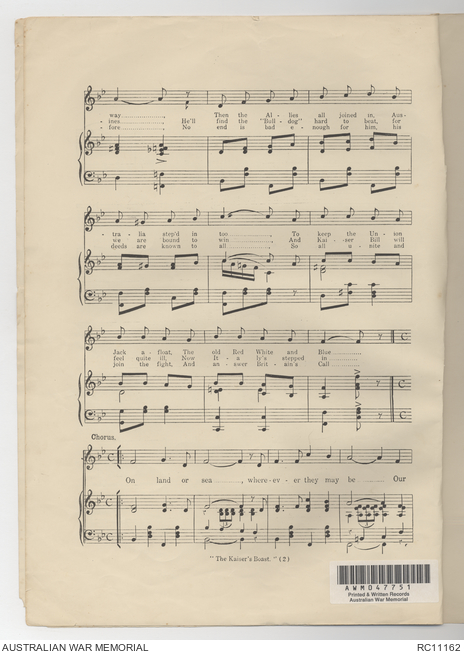 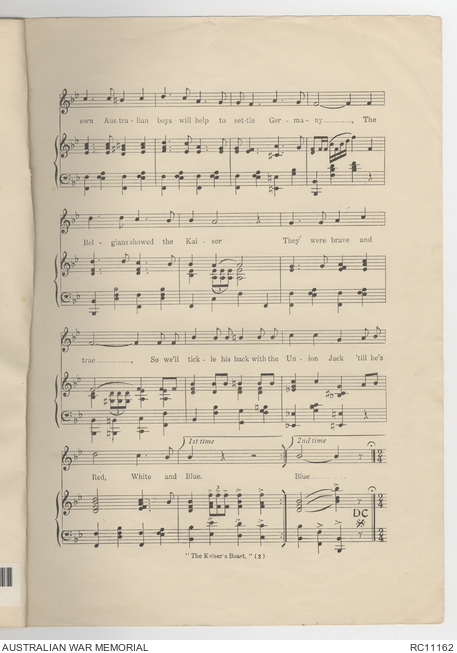 Sheet music for the song titled 'The Kaiser's Boast', written and composed by Sergeant Stanley David Hewitt. Hewitt was an Australian composer who served during the First World War. The song was first published in March 1916.

The cover of the music features a photograph of the composer in uniform. A caption on the cover notes "The composer, Sergeant Hewitt, is a Returned Wounded Soldier, having been shot right through one lung. Though suffering greatly through hemorrhage and weakness, he is independently handling his own clever composition throughout Victoria." The back cover of this piece music is blank and contains no advertisements or advertising previews of other music.

The Australian actress and singer, Dorothy Brunton, describing it as a 'dandy song' and requested permission to perform the song at fundraising events during the First World War period soon after it was first published. One report of the song soon after it was published appeared in The Bendigo Independent on 16 March 1916 where it reported that it was based on 'patriotic lines' and 'though not strikingly original, the music is pleasing, and the sentiment good'. The report continued to say that there was 'an attractive swing in the refrain'.

Stanley David Hewitt served with the 3rd Australian Infantry Battalion from August 1914 to May 1915, before being discharged and repatriated for medical reasons.

The first public performance of this song in Australia appears to have been given by Hewitt himself at a lecture of the landing on Gallipoli and the battle of Lone Pine at Centennial Hall, Brisbane, on Tuesday 3 July 1917. A repeat performance of the lecture was given at Albert Hall, Brisbane on 28 July 1917 with this song performed by Mr J D Abrahams during the evening. Hewitt often gave this lecture at events where this song was performed, by himself or others, during 1916. One of the most notable occurred at Bairnsdale, Victoria, on 15 October 1916 where it was noted that he was a Gippslander and the Bairnsdale Boys’ Band played this song, which was described as a ‘patriotic band march’.

This was also a popular song during the First World War at other concerts in Australia during this period. The Darlinghurst Concert Band performed this song as a march at two concerts on Sunday 30 June 1916. The first was at Centennial Park, Sydney and the second held at Coogee Beach, Sydney. A chorus performed the song at St Mark’s Sunday School concert in Bendigo, Victoria on 30 August 1916.

Welcome home events for soldiers also featured this song. One such occasion was the reception for returned soldiers, Sergeant J Pettigrew, Private M J Hannan, Private L Macfarland and Private S Wasson on 21 July 1918. The reception was held at the Congupua Public Hall, Victoria, with an encore performance of ‘The Kaiser’s Boast’ provided by Master Cyril Matthews.