[Sheet music] They were there! there!! there!!! 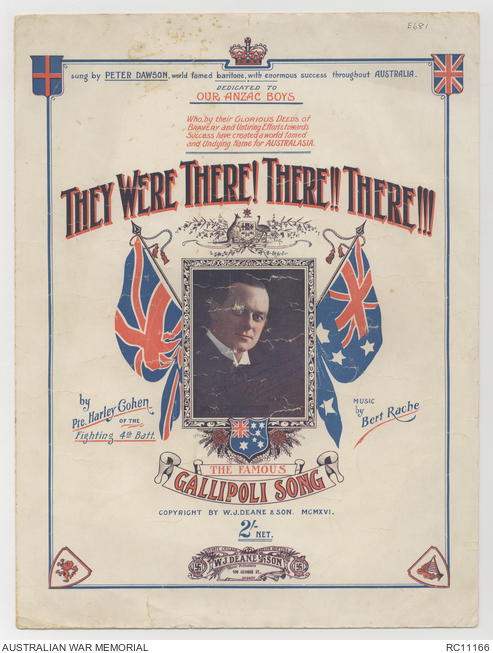 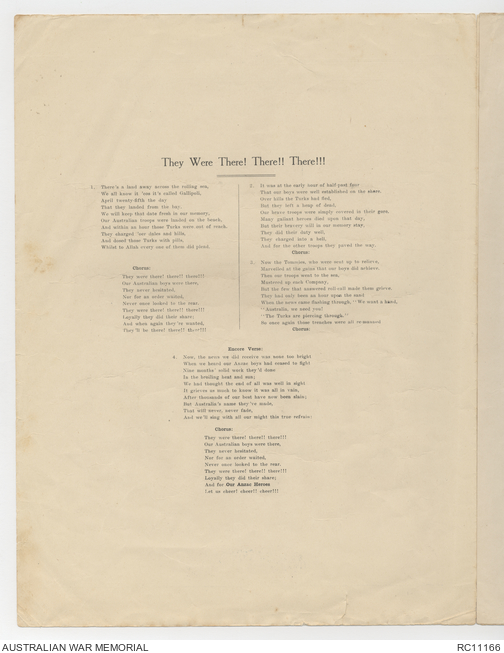 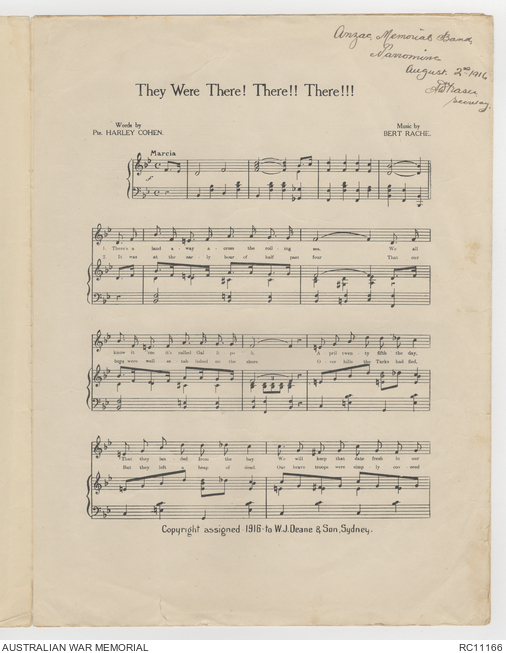 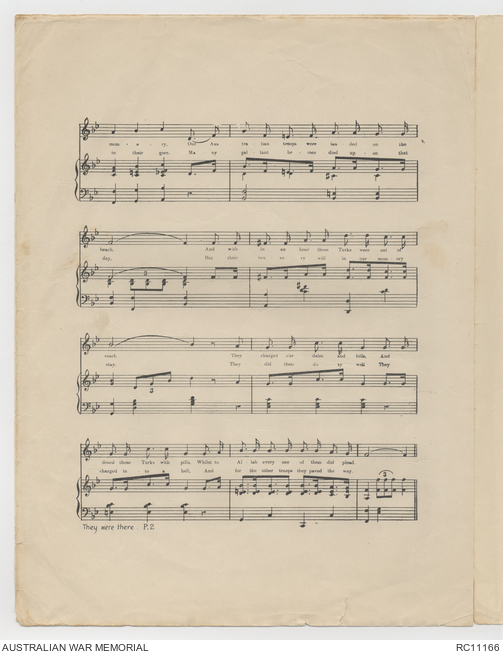 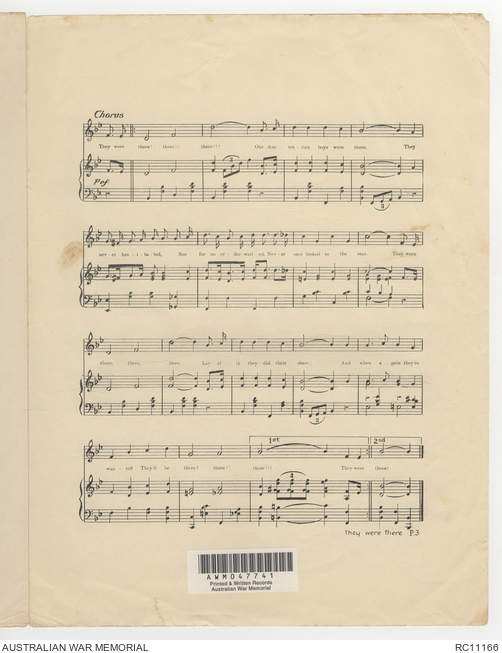 Sheet music for the song 'They were There! There!! There!!!', composed by Bert Rache with lyrics by Private Harley Cohen of the 4th Battalion AIF. The song was written and published in 1916. The cover features a photograph of performer Peter Dawson, flanked by the Union Jack and the Australian Flag. The cover proclaims the musics dedication to "Our Anzac Boys who by their glorious deeds of bravery and untiring efforts towards success have created a world famed and undying name for Australasia". An inscription on the first recto page reads: "Anzac Memorial Band / Narromine / August 2nd 1916 / A D Fraser / Secretary". The reverse cover features an advertising preview of the song 'To live in the Light of Your Eyes' by Alan M. Rattray.

This patriotic song was written in the trenches with Cohen reporting at its first performance that it was written 'in memory of those who had fallen, and he trusted those heroes would not be forgotten'. It was set to music by Bert Rache and published during March 1916. The first public performance was given by Mr Peter Dawson for a special matinee performance in honour of returned soldiers at the Tivoli Theatre, Sydney on 23 March 1916.

Harley Cohen was born in Sydney on 28 October 1892 and enlisted on 17 August 1914 with the 4th Infantry Battalion, 1st Brigade. He departed Sydney with his unit aboard HMAT Euriphides on 20 October 1914. Cohen took part in the landing on Gallipoli and subsequent battles. He was injured on the first day of the battle of Lone Pine and arrived back in Australia on 19 October 1915.

Articles mentioning performances of the song titled ‘They were there! there! there! began appearing in Australian newspapers around July 1916. It was popular with professional performers as well as amateur singers. An article in The Sunday Times, Sydney, on 16 April 1916, announced that the song ‘They were there! there! there!, was ‘sure to find favour with Australian singers’. The article continued to say that this song ‘tells of the gallant landing of our troops at Gallipoli, and the music is decidedly martial and catchy.’ The song was performed by Peter Dawson and a full brass band arrangement of the song was available to bandmasters of bands taking part in the Anzac Day procession in Sydney for free upon application.

This was also a popular song at concerts organised by returned soldiers in Australia during the First World War period. An event was held to welcome the Anzac Concert Party, a group of eight returned soldiers turned entertainers, at Cremorne Theatre on 1 February 1917. Two songs were performed that were reported as having been ‘written in the trenches ‘They were there! there! there!’ and ‘The Anzac Marseillaise’. Harley Cohen, the lyricist, was also a member of the concert party. The group collected 1000 pounds within 14 weeks and a further 1800 pounds was raised in Sydney for a Christmas appeal over a period of 2 ½ days. The money collected was distributed to the maintenance of a convalescent home and hospital for the Returned Soldiers Association as well as the returned soldiers and their dependents who needed it. At another concert by the Anzac Concert Party at Wyrallah, New South Wales, Harley Cohen, the lyricist, performed the song on 20 November 1916. At another concert by the group, held at Adelaide on 26 January 1917, Private Jack Healy performed ‘They were there! there! there!’. The first performance by the group in Western Australia, after touring the eastern states, was held on 3 February 1917, with the song ‘They were there! there! there!’ performed by Harley Cohen and copies of the sheet music for this song were sold during the evening. The Gallipoli Strollers also donated a copy of this music to the Wagga Wagga Citizens’ Concert Band, who performed it on 24 February 1918. This song was also in the repertoire of the Anzac Memorial Band who performed at Coraki, New South Wales, on 28 October 1916. The appearance occurred the night after a performance by the same group at Woodburn.