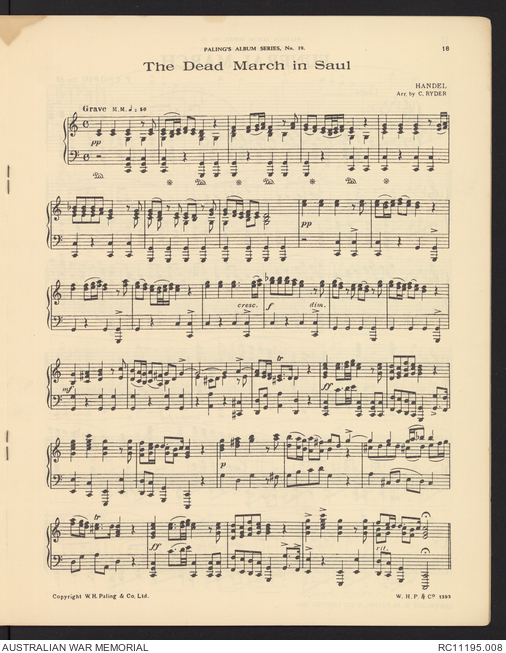 Sheet music for the instrumental march titled 'The Dead March in Saul', composed by Frederick George Handel and arranged by C. Ryder. This is the common name for the funeral march that appears in the third act of Handel's oratorio 'Saul'. The piece is sometimes referred to as 'Funeral march from Saul' or simply 'Funeral March'. The piece was composed between July and September 1738 with the first performance of the oratorio on 16 January 1739.

Funeral marches are a musical genre that are representative of funeral processions. These are often featured during occasions calling for solemn and dignified music due to the nature of the music. Handel adopted the term 'dead march' to refer to this genre. These are also used for marches played by military bands.

This copy of the piece was published around 1943 as part of the anthology 'Famous Marches for Piano' by W.H. Paling Pty. Ltd.

The Dead March from Saul regularly featured in memorial services in Australia for both soldiers and civilians who died during the First World War. Some of these were for military officers like Lord Roberts and Lord Kitchener. Lord Roberts, who had served in South Africa, was afforded a memorial service at Martin Place, Sydney, on 20 November 1914 with the proceedings opening with Handel’s musical work. Memorial services were held for Lord Kitchener across Australia with 8000 soldiers at Blackboy Hill Camp, Western Australia attending a service on 9 June 1916 where the Camp Band, reported to be one of the best in the state, played the Dead March from Saul. Other memorial services were held on the local front in the towns where soldiers had been associated. The Young Town Band played this march at a memorial service held for Sergeant Cotterill who had been killed at Gallipoli. Similar services were held at Bankstown for Corporal W J Herriman and at Lithgow for Bandsmen Woods and McNeil. Both Woods and McNeil had been members of the Lithgow Town Band before enlisting and the band assembled at the corner of Main and Bank streets, Lithgow before commencing ‘their march playing the mournful strains of The Dead March from Saul’ just before 11am on 11 June 1916.

This instrumental march was also often featured at funerals for soldiers on active service overseas during the First World War. The 16th Battalion Band played this piece during the procession through the main part of Cairo to the cemetery during the funerals of Trumpeter Norman Victor Foote, Private C B Alexander, both from Warwick, Queensland, and Private Leslie Ross, who had all served with Light Horse regiments. The three funerals were all held on 9 April 1915. Percy Copp, bandmaster of the 13th Battalion Band, drew attention to the feature of this work at funerals in his account of the band during the First World War, writing, “Have you ever stood at the graveside of some local dignitary and heard the approaching strains of Handel’s ‘Dead March in Saul’ played by a good band?” There was a reference to this piece in the letter written by Hector McLarty on 20 March 1915 in regards to the death of Major Parker where McLarty wrote: ‘His funeral was solemn and imposing….We marched with arms reversed through Cairo, the band playing the Dead March.’

Memorial services for Australia soldiers who had fallen during the First World War were held at local, state, and international level with ‘Dead March from Saul’ featuring in these services. The first of these was held on the National Day of Intercession with a service at Wesley Church, Melbourne on 3 January 1915. At the end of the service, this piece of music was played in honour of members of all allied armies who had died on active service. Memorial services were held at St Paul’s Cathedral, London for Canadian soldiers on 11 May 1915 and for Australian and New Zealand soldiers on 16 June 1915. Both services were attended by many wounded soldiers. 400 Australian and New Zealand soldiers from Weymouth and Harefield Park attending the latter service where a military band played ‘Dead March from Saul’ towards the end of the service, followed by a bugler sounding ‘The Last Post’. 7 000 men from military camps attended a memorial service for fallen soldiers which opened with bands playing ‘Dead March from Saul’ at the Exhibition Building, Melbourne, on 30 August 1915. Smaller memorial services were held for soldiers who had died on active service at Kyneton Botanic Gardens, Victoria on 4 November 1917 and at the Olympia Theatre, Rockhampton, Queensland, on 6 May 1918. The Royal Military Band and the combined Rockhampton and Mount Morgan Salvation Army bands played ‘Dead March from Saul’ at these services.

Fundraising concerts for the war effort and local organisations also featured this song during the First World War in Australia. One of these was held at Bamawm, Victoria, on 2 April 1915 for the Belgium Relief Fund. ‘Dead March from Saul’ was performed by an instrumental quartette featuring Miss Cowley, Mr Reddie, Mr Rolman and Mr Stoner with reports recording that it was ‘well rendered’. This instrumental piece was also played at a concert on 6 June 1915 at the Warnambool Botanic Gardens to raise money for the town’s Ambulance Fund.

This piece of music was very popular at memorial services for locals who had enlisted and also for the unveiling of honour rolls. An honour roll was unveiled at Dimboola Methodist Church for the young men in the congregation who had enlisted on 26 September 1915. The service closed with the rendering of ‘The Dead March from Saul’ by the organist Miss Head. A memorial tablet was unveiled at a memorial service for Trooper Keith Everard Watt from Kellerberrin, Western Australia, on 28 November 1915 which closed with the organist playing ‘Dead March from Saul’. Mr John Booth played ‘Dead March from Saul’ during a memorial service for Private George Renall Shaw at the Church of England in Bell, Queensland on 12 May 1916. During the service, an honour roll was unveiled and while the music played, the congregation laid wreaths beneath it. On 12 March 1916, the Newtown Tramway Band played ‘Dead March from Saul’ at the conclusion of a service to unveil a roll of honour at Central Station, Sydney. At that time, the 4 624 men from the New South Wales State Railway and Tramway Services had enlisted and of those, 150 had died on active service.

Mr Frederic Rose of Stockton Heath, Queensland, wrote lyrics to accompany the instrumental version of this piece. These were published in The Western Star and Roma Advertiser newspaper on 24 November 1916. Rose wrote that he had heard this piece played many times and had always ‘regretted that the composer did not attach suitable words to his music’ and that ‘Gradually, however, as the music has influenced me, I have been constrained to express my feelings in words. I send them in the hope that they may help and comfort others as they have helped and comforted me.’ It appears that the words were widely distributed as they featured in a report of the memorial service that was held at Kyneton Botanic Gardens on 4 November 1917.