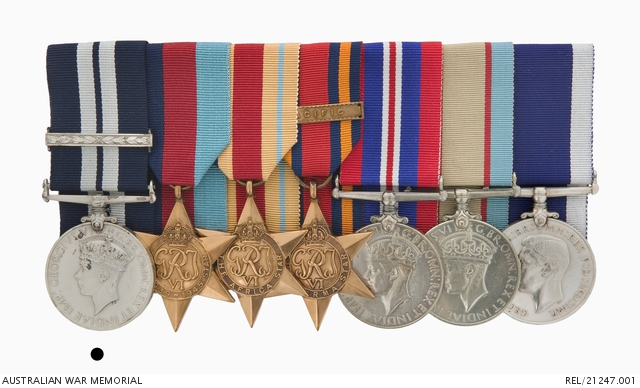 18665 Percy Albert 'Jumper' Collins was born in Murwillumbah in 1905, and joined the Royal Australian Navy in 1927 as a Stoker Second Class. Prior to the Second World War, he saw service in HMA Ships Canberra, Tattoo, Voyager, Swan, Waterhen and Yarra, and at the outbreak of war was serving as a Petty Officer Stoker in HMAS Adelaide. He was posted to the newly commissioned destroyer Napier in 1940, and remained with this ship for three years, being awarded the Distinguished Service Medal (DSM) in 1942 for his gallantry during the fighting off Crete. Later in 1942, he also received the Long Service and Good Conduct Medal, in recognition of his 15 years in the RAN. After a brief period in the Nepal in 1943, Collins moved to the Maitland, and then to the corvette HMAS Strahan, in which he saw out the war, being awarded a bar to his DSM in 1945. Chief Petty Officer Stoker Collins left the navy in 1946, and died in 1990. Only two bars to the DSM were awarded to members of the Royal Australian Navy during the Second World War. The citation for the Distinguished Service Medal reads as follows: 'For outstanding gallantry, fortitude and resolution during the Battle of Crete. During the battle, he was in charge of No. 1 Boiler Room of HMAS NAPIER. A heavy blast was felt, half the lights went out, the boiler level surged violently and a brilliant white light occurred in the furnace - which cannot be explained. Petty Officer Collins took the necessary precautions, reduced sprayer output until the water level steadied and then worked up to nearly full power, taking the increased load caused by the failure of No. 2 Boiler. This rating's steadiness contributed largely to the general effort of keeping the ship mobile.' The citation for the second award of the DSM reads: 'For courage, endurance and skill whilst serving in HMAS STRAHAN in escort duties for a period of more than three years under hazardous and trying conditions between the coast of Australia and the Philippines.'