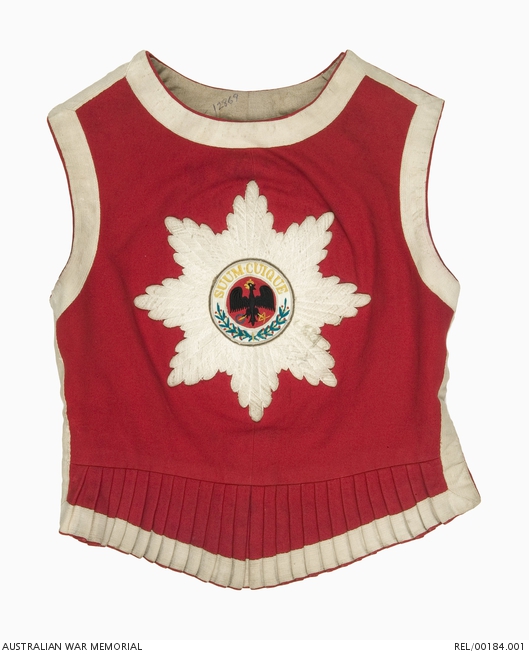 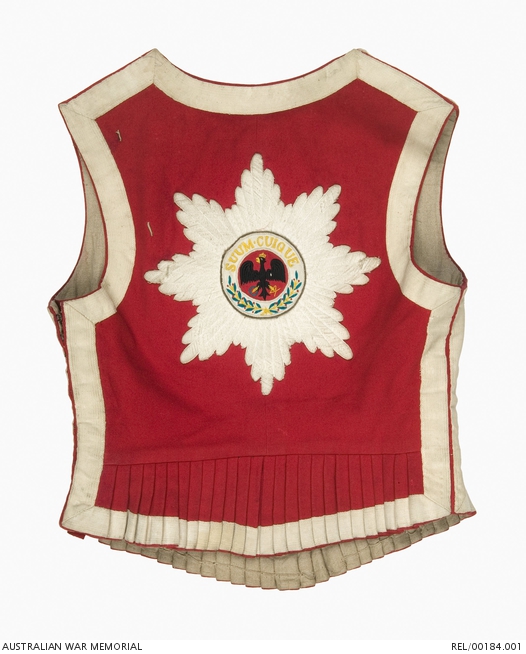 Scarlet wool parade vest with round neckline and short semi-circular heavily pleated skirt below the waist seam. The front and back of the vest is decorated with a large embroidered wool and cotton applique of the badge of the Order of the Black Eagle. It bears the motto 'SUUM CUIQUE' [To each his own]. All outer edges of the vest and side seams are trimmed with a broad cream coloured ribbed wool braid. The vest has a shoulder and side opening on the wearer's left side fastened with brass hooks and eyes. The entire vest is lined with unbleached linen and the pleats of the skirt are held in position with stitches across the lining. Inside the centre back lining is an ink stamp of the number '16'.The appliqued badge is sewn through to the lining with irregular running stitches. Several cotton eyelets have been sewn to the badges on both the back and front of the vest and on the vest itself at the back of the left shoulder to keep the shoulder belt in its correct position.

This parade vest is an example of part of the ceremonial uniform of a trooper of the Prussian Garde du Corps. The first Prussian monarch, King Frederick I, introduced the Garde du Corps, but they were later disbanded by his successor only to be revived by Frederick the Great in 1740. The regiment became the personal royal bodyguard of the King of Prussia and later the Kaiser. During the First World War, the Garde du Corps served in Belgium, Poland, Latvia and the Ukraine. The vest would have been worn with waist and shoulder belts as well as various pouches and was obtained in Paris in the 1920s by Robert Emil Luks.

Luks, an Australian who served with the Royal Australian Naval Bridging Train under the name Luxbridge, during the First World War, lived and worked in Europe during much of the 1920s and 30s and amassed as a 'hobby' a substantial collection of German and French uniforms and headdress which dated from the beginning of the First World War before more practical less colourful uniforms and steel helmets were adopted. His collection was purchased in its entirety by the Australian War Memorial in 1937 as a means of providing colour to its displays and to demonstrate the changes which took place in combat uniforms between 1914 and 1916, when Australian troops entered the fighting on the Western Front.