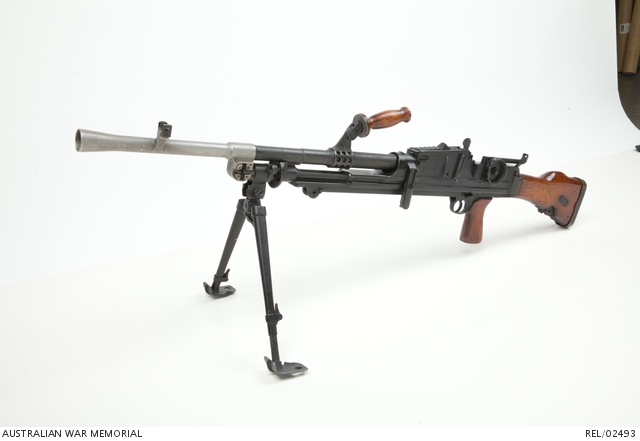 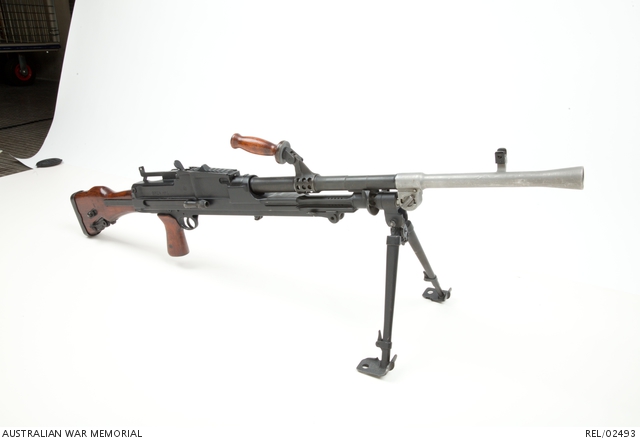 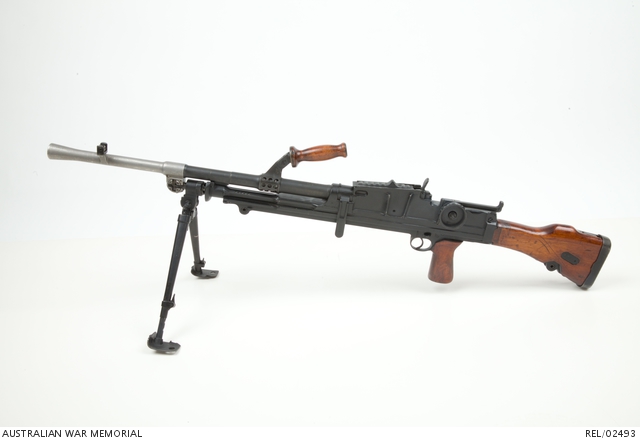 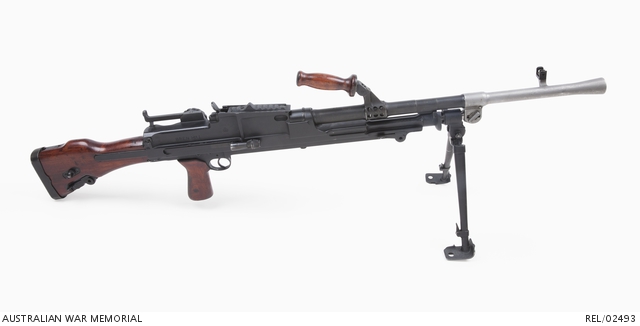 The BREN gun is a gas operated, air cooled, select fire machine gun. It has a quick detachable barrel and fires from an open bolt. The gun is operated by a long stroke gas piston located below the barrel. The gas block is mounted on a thin tubular sleeve which is located at the muzzle end of the barrel and forms part of the conical flash hider at the barrel muzzle. The gas block has a manual gas regulator with four settings. The action is locked by a tipping breech block from the rear of the breech block and locks in the upwards position, into a locking recess in the receiver. The return spring is located in the stock butt and is connected to the bolt carrier and gas piston assembly by a long rod. There is a short spring buffer located below the return spring at the juncture of the receiver and butt stock which acts against the whole receiver and recoils a short distance on the long rails of the trigger housing. This system significantly reduces felt recoil during fire. The charging handle is located on the right side of the receiver and does not reciprocate when the gun is fired. Later marks of BREN guns have a folding charging handle. Ammunition feed is from a top mounted detachable box magazine. The magazine is made from sheet steel and holds 30 rounds in a staggered row configuration (although in the field soldiers preferred to load only 27-28 rounds to reduce strain on the magazine spring and thus ensure feeding reliability in adverse conditions). The Mark 1 BREN guns were also provided with spring powered flat pan magazines which held 100 cartridges for antiaircraft use. The magazine housing has a sliding dust sliding dust cover. Spent cartridge cases are ejected downwards. The ejection port is normally closed with its own dust cover which opens automatically once the trigger is pressed. The trigger unit permits both single shots and automatic fire. A selector switch is located on the left side of the pistol grip. The gun fires from an open bolt and the spring loaded firing pin is operated by a projection on the bolt carrier once the bolt is fully in battery and locked. Due to the location of the top mounted magazine, the line of sight is offset to the left and the front sight is mounted on a base which protrudes upward and to the left from the gas block. An integral folding bipod is attached to the gas cylinder. The pistol grip is made from wood. There is a spring buffered butt plate and a folding shoulder rest attached on the top rear of the butt stock. The quick change barrel has a wooden carry handle attached. For sustained fire a tripod was provided with a sufficient supply of full magazines and spare barrels so the BREN gun could serve as a medium machine gun. The same tripod was also adaptable for the anti aircraft role. Dual gun mounts were also used for anti aircraft role and on certain land vehicles also used for Commando hit and run missions during the Second World War. The right side is marked BREN Mk1 ENFIELD crown 1940 and on the left 12/50 FTR. The Mk1 barrel (drilled) has a silver frost front section and is marked with Lithgow Small Arms Factory proofs and A360. The breech block is missing.

The BREN gun was developed from a requirement to replace large quantities of Lewis and to a lesser extent Vickers Mk 1 machine guns which were left over from the First World War. During the 1930s exhaustive trials were conducted and the final choice fell on the Czechoslovak Zb26, modified to fire .303 ammunition with a slightly improved gas system. This gun became the ZGB30 and after another series of trials and modifications was forwarded to the War Office Acceptance Committee. The committee was satisfied with he weapon and arrangements were made to produce the gun at the Royal Small Arms Factory at Enfield. The gun was named the BREN from BRno and ENfield. The gun was made from conventional machining and the first one was completed in September 1937. By July 1938, 300 per week were being manufactured and by June 1940 more than 30,000 guns had been produced and issued. Bren guns were also manufactured in Australia and Canada during the Second World War. The Bren gun is considered to be one of the best light machine guns ever produced and served with distinction during WW2, Korea, Borneo, Malaya and was still operational during the 1991 Gulf War with second line units in the British Army, having been rebarreled to 7.62 NATO during the 1960s. This example was made in the UK and refurbished at the Lithgow Small Arms Factory in December 1950.