Informal outdoor portrait, possibly in Palestine, of the Drummond twins, both members of the ... 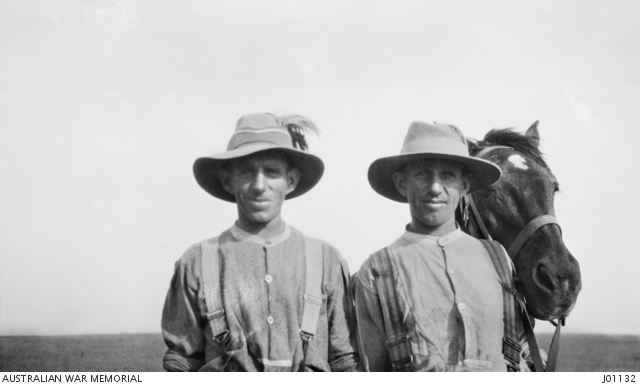 Informal outdoor portrait, possibly in Palestine, of the Drummond twins, both members of the Australian Mounted Divisional Train (AMDT). On the left is 52 Warrant Officer (WO) Archibald McIntyre Drummond and on the right is 1864 Corporal Matthew Andrew Drummond, a horse's head resting on his shoulder. An older brother William Currie Drummond also served in the AIF. Archibald was a butcher prior to enlistment in Queensland on 25 August 1914; he served with the 35th Company, Australian Army Service Corps (AASC). Matthew, a grazier, enlisted on 2 September 1915, embarking in January 1916 for service overseas with the 13th Reinforcements, 2nd Australian Light Horse Regiment. He subsequently transferred to Headquarters, AASC, Anzac Mounted Division.