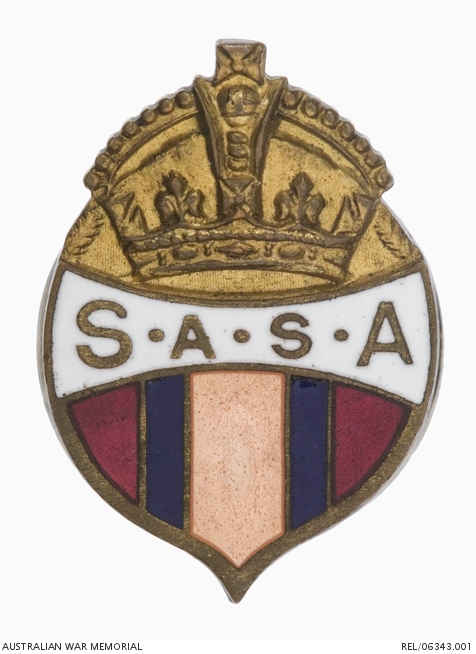 Bronze lapel badge with the King's crown above a shield with the letters 'S.A.S.A.' and enamelled stripes of red, blue and yellow. These colours represent the ribbon of the Queen's South Africa Medal. The reverse of the badge has a screw fitting from which the retaining plate is missing. The maker's marking 'AMOR SYDNEY' is also impressed into the reverse.

Associated with Trooper James Somerville Kerr. Kerr was born in Balmain in 1878. In 1901 he enlisted in the 2nd New South Wales Mounted Rifles and went with them to South Africa, arriving in April. Kerr served with the unit in South Africa until it returned to Australia in May 1902. He was involved in operations in the Transvaal against Boer General De La Rey. After returning from the war Kerr became a carpenter and in 1916 enlisted in the AIF, serving in the 9th Field Company Engineers. Kerr died in 1938.