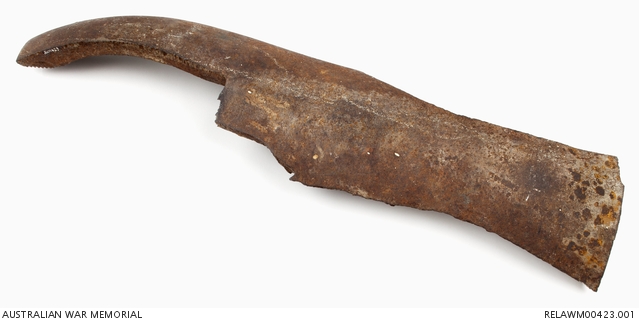 Large fragment from the upper section of a German High Explosive (HE) shell. There are several ridges on the inside side of the end of the fragment, indicating the thread where the fuse was screwed into the shell.

This shell fragment was collected by members of the Australian War Records Section (AWRS) at Courtney's Post on 10 January 1919. A small party of AWRS staff, led by Lieutenant William Hopkin James, worked on Gallipoli between December 1918 and March 1919, taking photographs and collecting items for the national collection.

Courtney's Post was the centre post of three - Quinn's, Courtney's and Steele's - that occupied precarious, but critical, positions along the lip of Monash Valley, in the heights above ANZAC Cove. Monash Valley ran right into the heart of the ANZAC position and, as Shrapnel Valley, continued on down to the beach at ANZAC Cove. The post was named after Lieutenant Colonel Richard Courtney, commander of the 14th Battalion, which had occupied the position on 27 April 1915. The position had been originally captured by men of the 11th Battalion on the morning of 25 April.