Australian infantrymen parade along Queen Street a few days prior to embarking on SS Rangatira ... 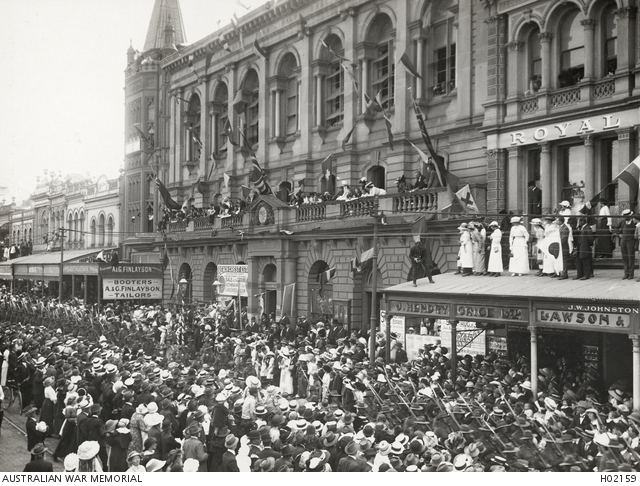 Australian infantrymen parade along Queen Street a few days prior to embarking on SS Rangatira for overseas service on 24 September 1914. On Saturday afternoon 19th September 1914, a force of over 2000 men – Light Horse, with Colonel Stodart commanding the mounted section, Infantry, under Colonel Lee, Artillery, Army Service, and Army Medical Corps, marched through the streets of Brisbane in a ‘long, impressive column’. The Brisbane Courier described the men, who had come directly from the training camp at Enoggera, as ‘a fine body of sun-tanned, athletic men in khaki’. The Light Horse lead the march, followed by their motor machine guns and the 18 pounder guns of the Field Artillery, then the Service Corps, and the Red Cross wagon. The march followed a considerable route – about 12 1/2 miles from Enoggera via Kelvin Grove Road, Countess Street, George Street, Queen Street, Brunswick Street, and on by Bowen Bridge Road and Newmarket Road back to camp. See H02158 - H02160 for a sequence of the parade.