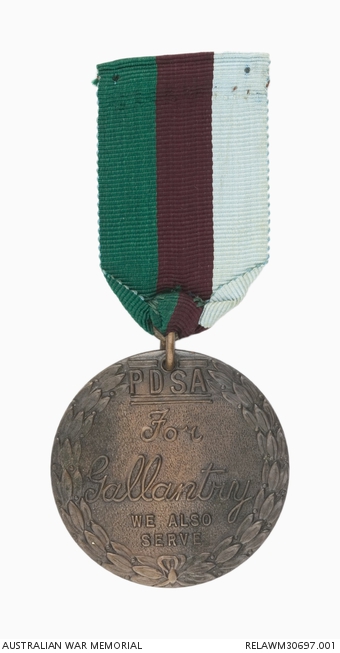 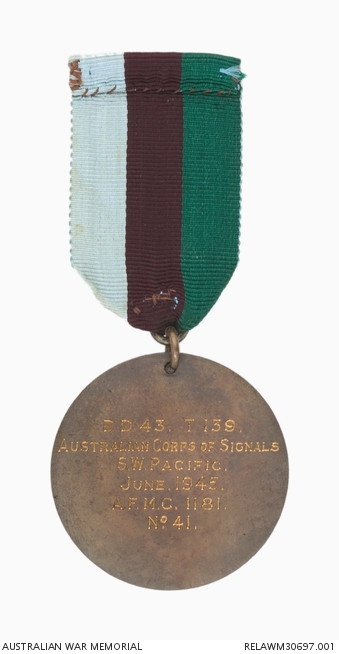 Dickin Medal awarded by the People's Dispensary for Sick Animals in Britain for animals displaying outstanding gallantry or service in wartime. The bronze medal bears a raised laurel wreath around the edge of the obverse and raised lettering in the centre 'PDSA For Gallantry WE ALSO SERVE'. The reverse is plain and is engraved 'DD 43. T139. AUSTRALIAN CORPS OF SIGNALS S.W. PACIFIC. June, 1945. A.F.M.C. [Allied Forces Mascot Club number] 1181. [Medal] No 41.' The ribbon is in equal stripes of green, brown and pale blue.

This medal was awarded to Australian Army Blue Bar cock pigeon DD43 T139 for gallantry as a result of a flight he undertook through a severe tropical storm near Madang, New Guinea, on 12 July 1945. At the time the bird was located at 10 Pigeon Section (Type B) attached to Detachment 55 Port Craft Company, Madang. On that day he carried the following message, from a foundering boat to Madang, flying 40 miles in 50 minutes: 'To: Detachment 55 Australian Port Craft Company, MADANG. From: A.B. 1402. Date: 12.7.45. Engine Failed. Wash on to beach at WADAU owing very heavy seas. Send help immediately. Am rapidly filling with sand. TOO: 0800 - Senders signature - HOLLAND Cpl. TO Liberation 0805 - No. of copies 2. TOR at Loft - 0855'. As a result of the successful delivery of the message the boat, together with valuable stores, ammunition and equipment was salvaged. The bird had previously completed 23 operational flights over a total distance of 1,004 miles. The citation for the award reads: 'Awarded to Pigeon DD43 T139 for gallantry carrying a message through a severe tropical storm thereby bringing help to an army boat with a vital cargo, in danger of foundering.' The pigeon was donated to the army in 1943, as a patriotic gesture by a civilian pigeon fancier, Mr George Adams of 11 Vigo Street, Footscray, Victoria, for use in signals units in New Guinea. Mr Adams, however, was not the bird's breeder. As part of his effort to obtain birds for the war effort Adams approached members of pigeon clubs in the Melbourne area, seeking the donation of birds. After he had approached the Yarraville Pigeon Club, one of its members, Mr Gordon Whittle, whose family had bred and raced pigeons for many years, donated a number of birds. One of the pigeons he bred was the bird who was awarded this Dickin Medal. Note that the date on the reverse of the medal, June 1945, is incorrect.