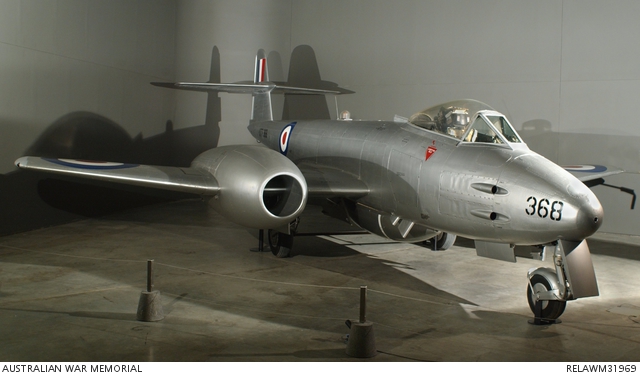 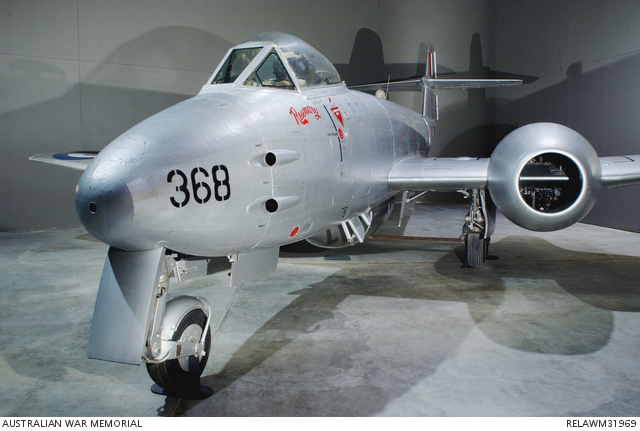 Gloster Meteor Mk 8 jet fighter, serial number A77-368. The aircraft was constructed in the United Kingdom (UK) and was allotted the British serial number WA 952. It has an airframe constructed primarily of aluminium alloy and is fitted with two Rolls-Royce Derwent Mk VIII Engines, Nos 15503 (starboard) and 6360 (port). The airframe consists of a one piece wing centre section, which includes the centre part of the fuselage and the two complete engine installations with cowlings. The nose section includes mounting points for four Hispano 20 mm Mk V cannon. The pilot is housed in a cockpit fitted with a sliding bubble canopy. The nose assembly bolts to the wing centre section. The rear fuselage is also attached to the centre section.

This Gloster Meteor Mk 8 Jet Fighter arrived in Iwakuni, Japan, in March 1951 and in July 1951 was assigned to 77 Squadron (Sqn) RAAF in Korea. It was attached to 77 Sqn in Korea from July 1951 to August 1953. During this time it flew a total of 485 operational missions and recorded an operational flying time of 484 hours.

These operations included armed reconnaissance/interdictions, rocket strikes, napalm strikes, airborne alert patrols, fighter sweeps, combat air patrols, searches, as well as escorting United States bombers. It was also involved in six engagements with MiG-15 aircraft and on 3 November 1951, while piloted by Sergeant M E Colebrook DFM USAM, it was credited with damaging a MiG in combat. Sergeant R L Gilmore was Mentioned in Dispatches and flew 143 missions with 77 Squadron of which 69 were flown A77-368. The citation specifically mentions a rocket strike on 15 June 1953 on Sunchon North Korea while flying A77-368.

The aircraft was also flown extensively by Pilot Officer R F Fox DFC USAM who completed 133 missions with 77 Sqn of which 50 were in A77-368. A total of 104 pilots are known to have flown operationally in this aircraft of whom 39 were decorated at the end of their tours. In October 1954 77 Sqn ceased to be operational and A77-368 was returned to Australia where it was subsequently transferred to 75 Sqn RAAF, Williamtown, New South Wales (NSW). In 1958 the aircraft was transferred to 22 Sqn RAAF, Richmond, NSW, and then in 1960 to Base Squadron, Fairbairn, Australian Capital Territory (ACT). The Australian War Memorial acquired the aircraft on 22 September 1960.

After a period of storage at Duntroon the aircraft was dispatched to RAAF Wagga for restoration by RAAF trainees in 1981. The aircraft arrived back in Canberra on 30 August 1983.

The aircraft has the name 'Rosemary' painted in red on the forward left fuselage near the cockpit. It is believed to be a reference to the fiancé of Sergeant Bob Strawbridge DFM, who flew A77-368 in Korea before killed in a mid-air collision off the coast of Williamtown, NSW, in 1953.