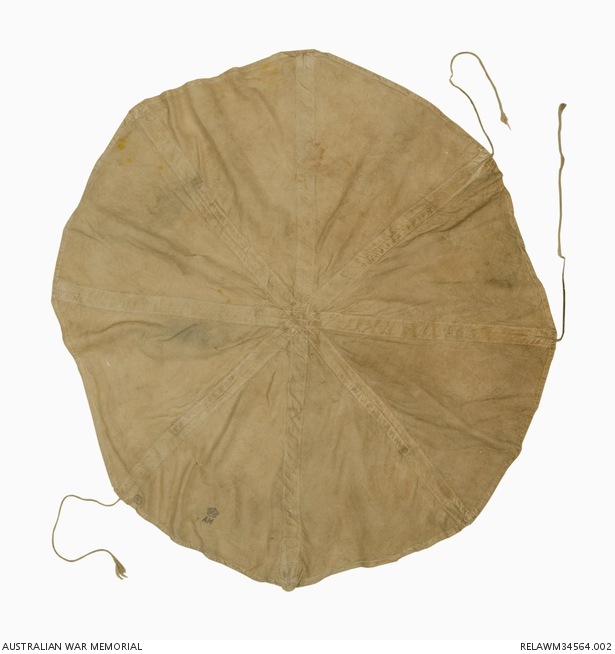 Tan-coloured circular piece from a parachute.

Section of parachute worn by Sergeant John Wood as sun protection while walking through the desert in Libya and Egypt in 1942.

On the night of 7/8 October 1942, after being hit by anti-aircraft fire, the crew of Wellington DV504/G of 40 Squadron RAF bailed out over the Libyan Desert. Four of the crew rendezvoused at the crashed aircraft, over 480 kilometres from the closest British positions at El Alamein. Fearing capture by the Germans if they remained, they decided not to wait any longer for the two missing crew members; Canadian J16980 Sergeant C Hill and British 141454 Sergeant K R Bowhill.

The two British gunners, 1272144 Sergeant A W Butteriss and 749479 Sergeant E A Linforth, had sustained ankle injuries landing but agreed to leave with Australian wireless operator 403540 Sergeant John Kevin Wood and Canadian pilot R78542 Warrant Officer Robert Leslie Spence. Collecting their emergency rations, including several tins of bully beef, sixteen packs of hard tack, some full water bottles, milk tablets, chocolates and toffees, they headed into the desert. Wood took this top section of his parachute to use as sun protection by wearing it around his head and neck.

Their aircraft had crashed somewhere near Fort Capuzzo in Libya, so they headed south east into the desert, before walking parallel with the coast. After four days they crossed the border into Egypt. Walking in wool lined flying boots for days on end over sand and loose rocks proved challenging, and the heat affected them all. After six days, Butteriss could not continue with his injured ankle and elected to be left behind with a share of the rations. Two days later, Linforth made the same decision.

Wood and Spence continued and 15 days after they began their journey they reached the Qattara Depression. When they left Linforth they still had four tins of bully beef, three tins of chocolate, over a dozen biscuits, and 20 milk tablets. They tried to make a can of bully beef last three days for both men, but by the end of the nineteenth day their food rations ran out and they were down to only two full bottles of water between them; the 2 gallon tin that they continued to carry was empty.

They occasionally met Bedouins who gave them small amounts of food and water. They also managed to find water at some wrecks in the desert and used tyres from the wrecks to repair the soles of their boots. There was one small shower of rain during the journey - not enough to fill their water bottles, but enough for them to drink out of a rock pool.

On the morning of 2 November, the twenty-sixth day of their journey, they heard the sounds of motor engines. Heading north, they were several kilometres north of El Maghra when they were discovered by a British advance armoured division who took them to safety. After recovering from their ordeal, Wood and Spence returned to flying.

The entire crew – four of whom were taken prisoner by the Germans – survived the war.