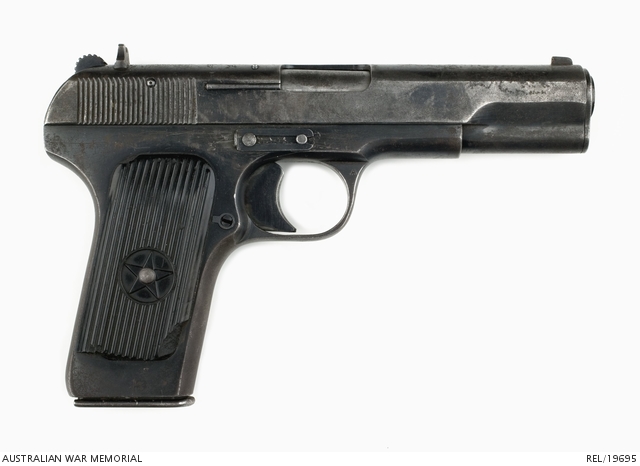 Chicom Type 54 semi automatic pistol. Top cocking slide action with serrated edges at the rear and an exposed hammer. The left side is marked with the serial number 66 and 1963. The top slide is marked with three Chinese characters indicating 54 Type. Two piece black plastic grips with vertical ribs and a star in the centre. It has a fixed lanyard loop on the butt and a detachable 8 round magazine.

This pistol is a copy of the Russian Tokarev TT Model 1933 which was a standard Soviet pistol during the Second World War and afterwards became popular with communist block countries, many of which produced copies under licence. This particular pistol was captured by 7 RAR on Operation Concrete 1, 23 April 1970 during a contact in a dry creek bed at Quan Duc Phanh in Phuoc Tuy Province in South Vietnam. It was one of a substantial number of weapons captured from the enemy who were conducting a sweep against Dat Do, Long Dien, An Ngai, and Phuoc Hai areas. (see file for more details).