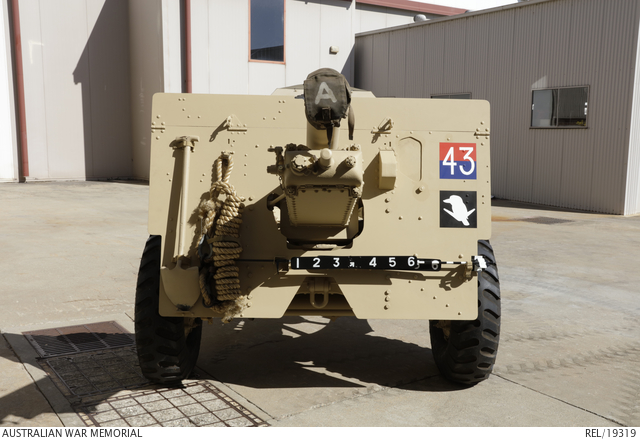 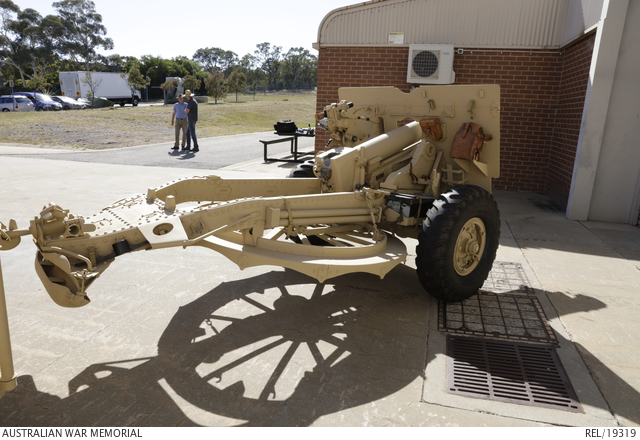 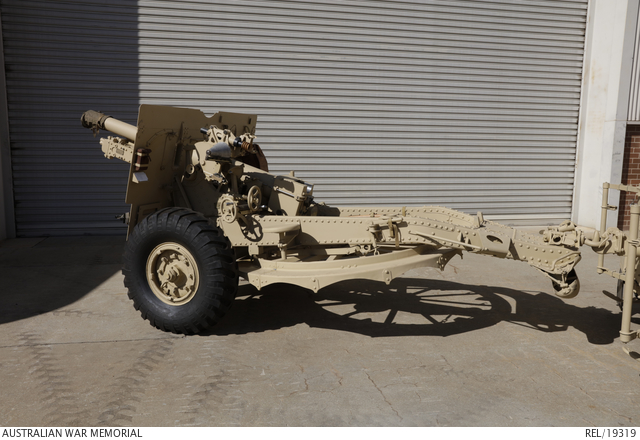 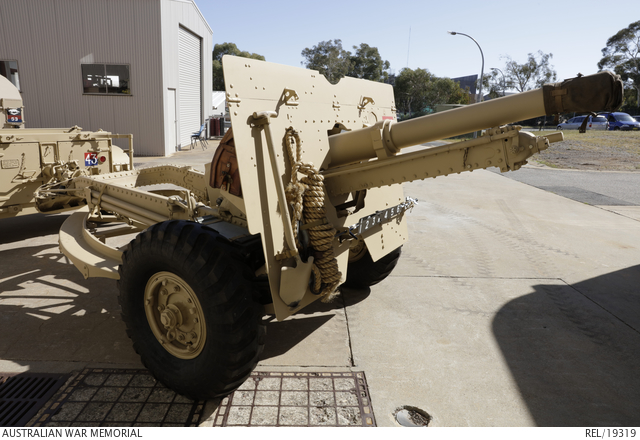 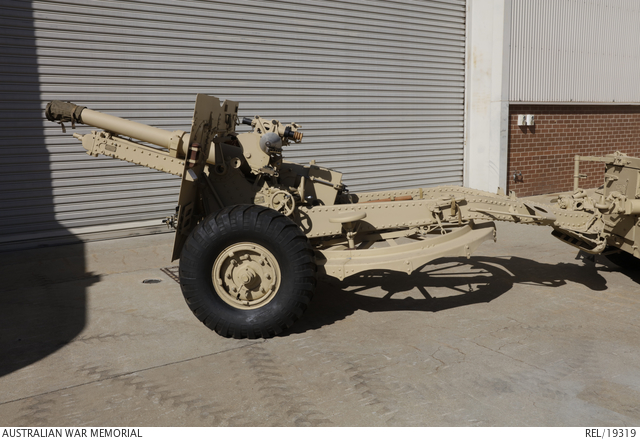 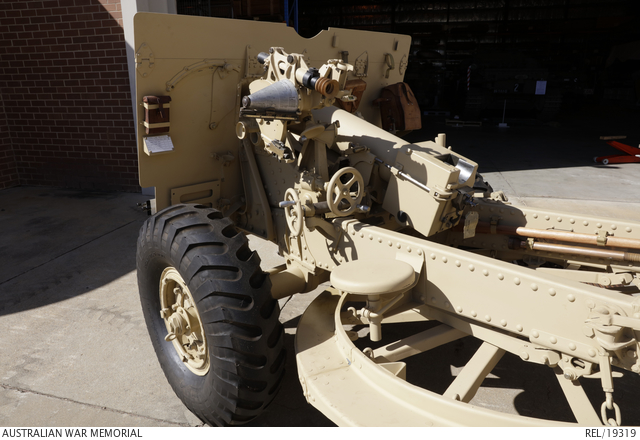 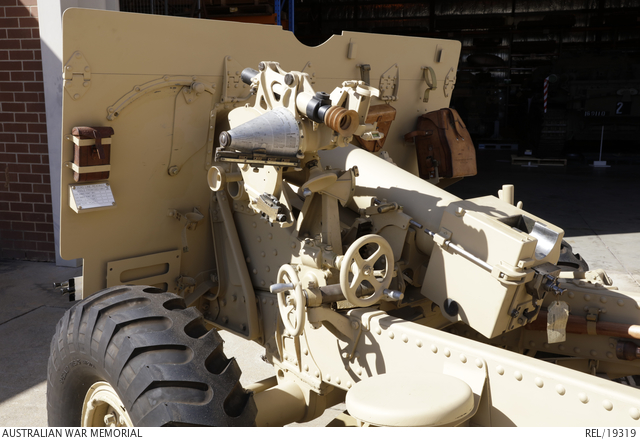 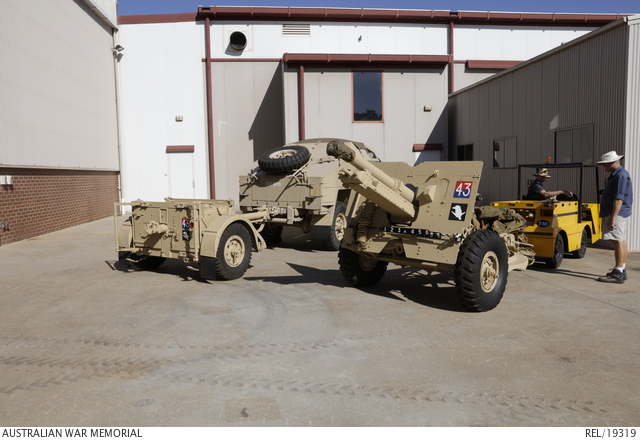 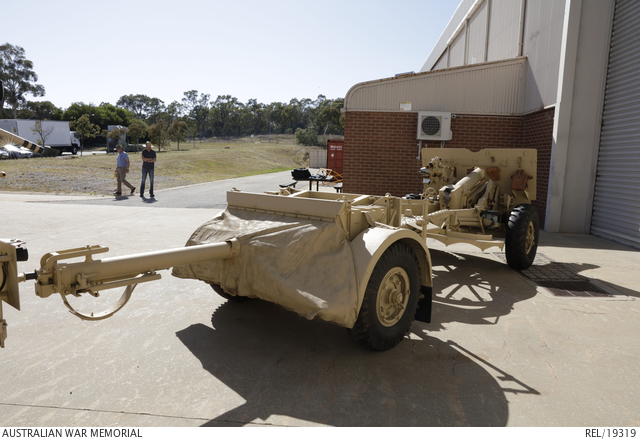 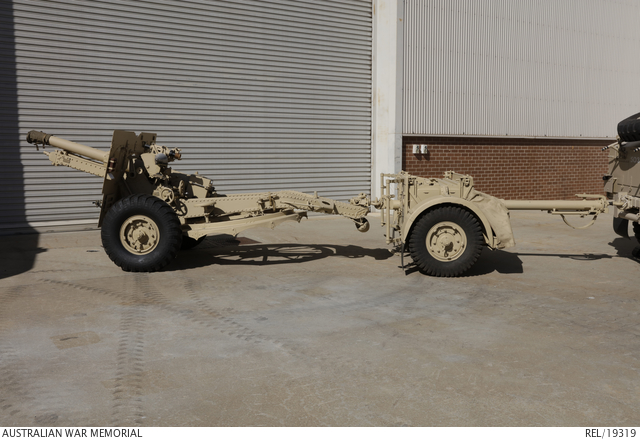 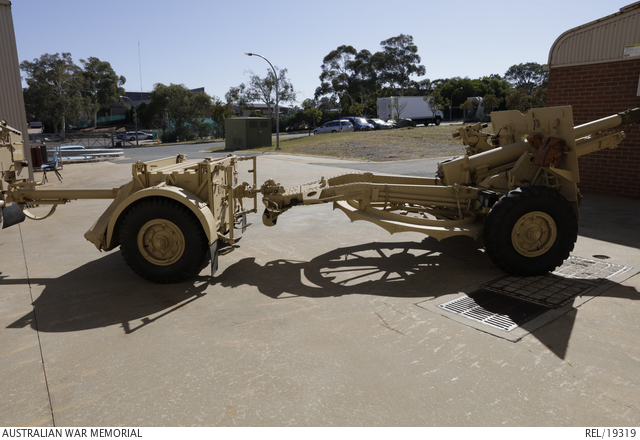 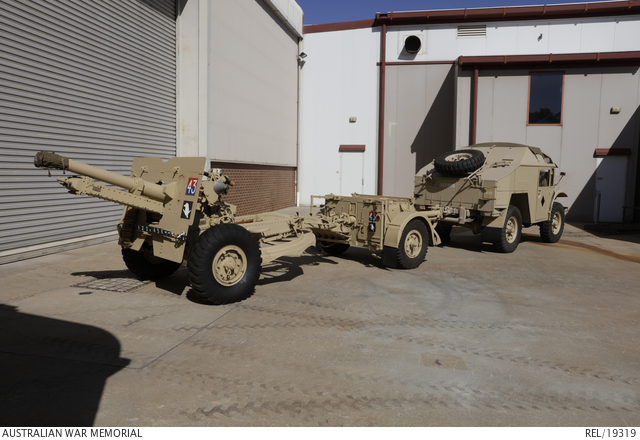 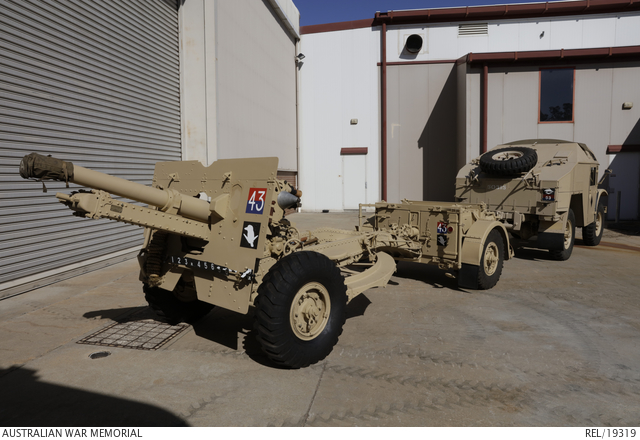 The gun shield is armoured steel. A shield flap which folds forward is attached by hinges to the top of the shield. There is a sighting shutter in the left side of the shield which is closed by a sliding plate on a quadrant. On the rear left of the shield in front of the gunner's position is a range table to determine the charge needed when firing at different ranges. On the right side of the shield two leather cases are attached. One contains a clinometer and the other contains a dial sight. Attached to the bottom right of the gun shield is a metal bracket containing a box of spares for the gun. Another bracket is attached to the trail near the gun shield which contains another box for spares.

Attached to the front left of the gun shield is a shovel and a drag rope. Along the bottom of the shield, two cross head aiming posts are attached. Both posts have a black plate with '123 [arrow] 456' stencilled on in white paint. Painted on the front right of the gun shield is a red over blue square with a white '43' painted within. Underneath the first square is a black square with the silhouette of a kookaburra sitting on a boomerang painted in white within.

The elevation and traverse hand wheels are located on the left side of the carriage. The elevation wheel gives the barrel the maximum depression of +5 degrees and elevation of +45 degrees. The barrel has a traverse of 4 degrees to the left and right using the traversing wheel. Located near the traverse wheel on the left side of the trail is a brass manufacturer's plate with 'CARR 25 POUNDER MK 1/L/ / G + J WEIR 1941 / REG NO 504' in both raised and stamped lettering and numerals.

The Mk 2 gun fitted to the Mk 1 carriage was the standard British and Commonwealth artillery piece during the Second World War.

The first Australian unit to be issued with the 25-pounder guns was the 2/3rd Field Regiment who were training in England in 1940. They were equipped with British and Canadian made guns. Other Australian Regiments serving in the Middle East were also initially equipped with the British made guns.

Production of the 25-pounder guns in Australia did not get underway until the latter stages of 1940 in both government and commercial factories. The first Australian built 25-pounder was completed in May 1941 and the Australian made guns were soon being shipped overseas to Australian regiments on active service. At the end of production in Australia in 1943 over 1500 units had been built.

The 25-pounder acquitted itself well in action in the Middle East, North Africa and in the South West Pacific theatres of operation. It performed well in the wide variety of conditions it encountered in these theatres and was very popular with the gun crews due to its ease of handling, its accuracy and adaptability.

The 25-pounder remained the standard gun in Australian field artillery regiments until replaced in the early 1960s by the American built M2A2 105mm Howitzer. It did remain in use with Reserve regiments until 1975 when it was finally withdrawn from service.