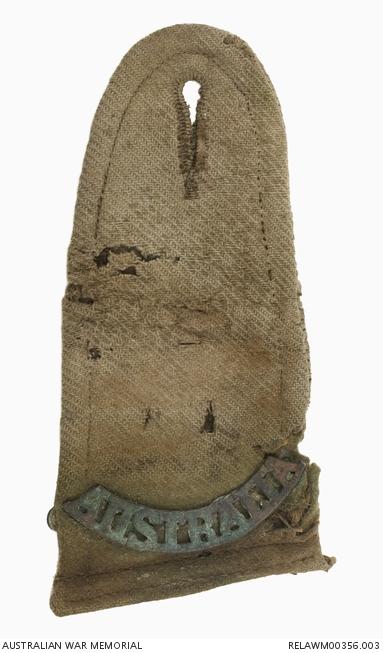 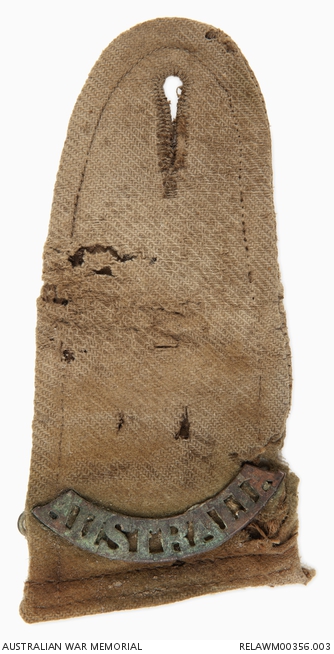 Damaged shoulder strap from an Australian tunic. The strap has an oxidised 'AUSTRALIA' shoulder title at one end, and a button hole at the other. There are two vertical slits above the title, and above them two smaller horizontal slits These would have been used to secure brass unit titles (numbers and letters) to the shoulder strap. The strap has several holes, including near the end of the 'AUSTRALIA' shoulder title. The title is slightly warped and has a coating of verdigris, with a small amount of dried mud embedded in the voided sections.

Relic of the advance towards Krithia made by the 2nd AIF Brigade (5, 6, 7 and 8 Infantry Battalions) on the afternoon of 8 May 1915. Some 500 Australians were killed in this attack, and many of their bodies, being under direct enemy fire, could not be recovered.

Charles Bean and the Australian Historical Mission returned to Gallipoli in early 1919, and visited the Krithia battlefield on 8 March, looking for signs of the Australian soldiers. In his book 'Gallipoli Mission' (1948), Bean wrote that they 'found the remains of Australians everywhere on the plain, as far forward as the two trenches of the Redoubt Line, 400 and 500 yards ahead respectively. We found Australian kit, and the arm patches of the 6th Battalion, red and purple, and the bronze "Australia" from the shoulder strap, right up to the front Redoubt Line.'

A number of these poignant items were collected by the Historical Mission, while the bodies were buried, mostly in Redoubt Cemetery, by the Imperial War Graves Commission.

The change from Australian units wearing metal unit shoulder titles to cloth unit colour patches was ordered while they were training in Egypt in March 1915. This shoulder strap has holes where the brass unit titles would have originally been worn, before the unit changed to wearing colour patches on the upper sleeves.