Remains of a colour patch attached to a piece of tunic : 6 Battalion AIF, Krithia, Gallipoli 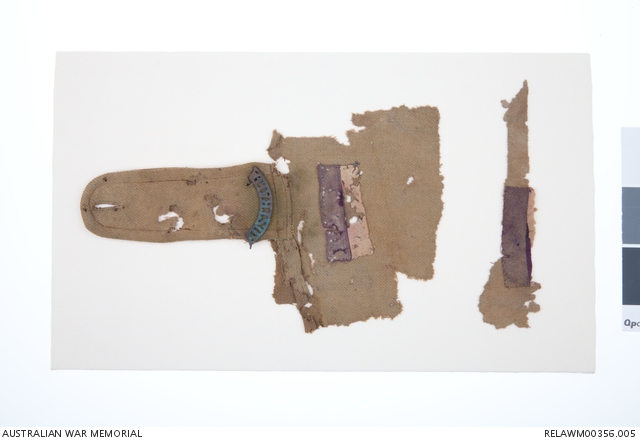 Top half of a horizontally aligned purple over red colour patch, representing 6 Infantry Battalion, AIF, sewn to a section of khaki sleeve from an Australian tunic. The upper, purple, section is made of wool flannel and has faded, except for a thin strip where it was sewn to the lower section of red fabric, which has since come away from the purple fabric. A small patch of faded red fabric is still attached to the purple section. This piece appears to be made of felted wool and has faded to a pale pink.

Relic of the advance towards Krithia made by the 2nd Brigade AIF(5, 6, 7 and 8 Infantry Battalions) on the afternoon of 8 May 1915. Some 500 Australians were killed in this attack, and many of their bodies, being under direct enemy fire, could not be recovered.

Charles Bean and the Australian Historical Mission returned to Gallipoli in early 1919, and visited the Krithia battlefield on 8 March, looking for signs of the Australian soldiers. In his book 'Gallipoli Mission' (1948), Bean wrote that they 'found the remains of Australians everywhere on the plain, as far forward as the two trenches of the Redoubt Line, 400 and 500 yards ahead respectively. We found Australian kit, and the arm patches of the 6th Battalion, red and purple, and the bronze "Australia" from the shoulder strap, right up to the front Redoubt Line.'

A number of these poignant items were collected by the Historical Mission, while the bodies were buried, mostly in Redoubt Cemetery, by the Imperial War Graves Commission.