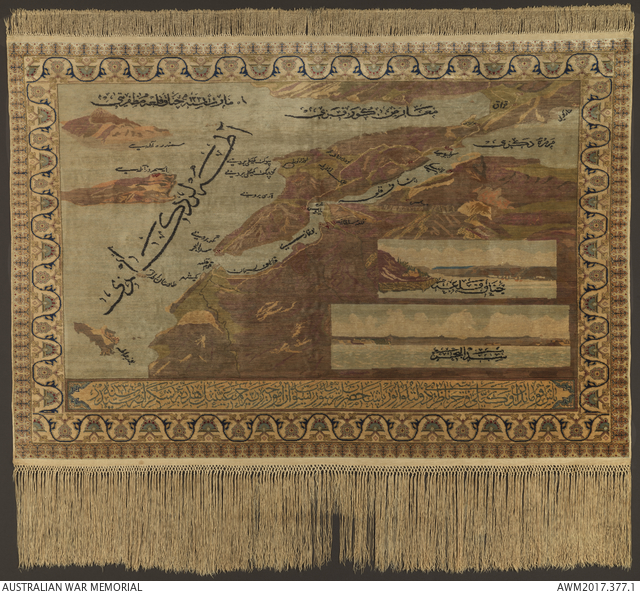 This rug was made to commemorate the Ottoman victory in March 1915 in repelling the allied fleet at Çanakkale, a city on the southern coast of the Dardanelles in Turkey. This was a triumph for the Ottoman forces, and was the precursor to the Gallipoli campaign. The design also shows the Gallipoli peninsula and its main battle sites, and includes two inset profiles of the Turkish coastline in an rare example of late-Ottoman textile art. The commissioning of such a fine rug woven entirely of silk attests to the importance of this campaign in Ottoman history.

The inscription at the top left translates to “5 March 1334”, an Islamic Rumi calendar date equivalent to 18 March 1915, now commemorated annually as Çanakkale Victory and Martyrs’ Day. The main carouche at the bottom of the work indicates that this was given in gratitude to His Excellency Enver Pasha, Vice Commander-in-Chief and Minister of War and one of the leaders of the “Young Turk” revolution that overthrew the Ottoman Sultan Abdülhamit II in 1909. As Minister of War, he was supreme commander of Turkish forces during the Gallipoli campaign.

Only three rugs of this design are said to have been commissioned. This one is believed to have been brought to Australia by a descendant of Enver Pasha; of the other two, one is now in the collection of the Dolmabahçe Palace, while the other that was presented to Mustafa Kemal Ataturk, is on permanent display at the Istanbul Military Museum (Askeri Müze).