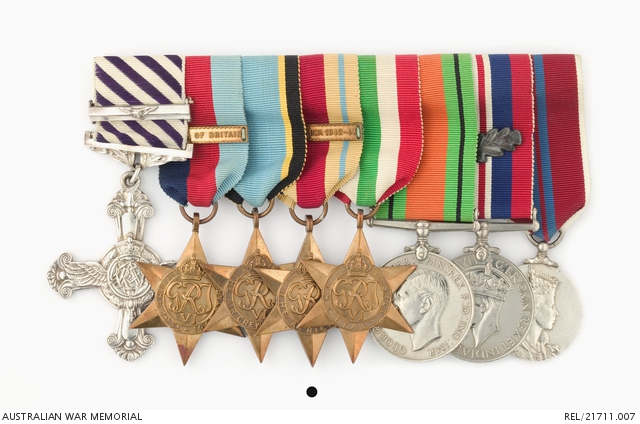 Awarded to Air Marshal Sir Ronald Lees, RAF. Ronald Beresford Lees was born at Broken Hill, NSW on 27 April 1910 and joined the RAAF as a Point Cook cadet in January 1930. A year later, he accepted a short-service commission in the RAF which was extended and by June 1936 he had reached the rank of Flight Lieutenant when he was granted a permanent commission. Lees was Squadron Leader of 72 Squadron from late December 1938, a role he would continue until 22 July 1940. From early June 1940, the Spitfires of 72 Squadron flew patrols to cover the evacuation of Dunkirk and Lees was responsible for chasing a German Ju87 Stuka through an anti-aircraft barrage and shooting it down. His Distinguished Flying Cross (DFC) was awarded for the leadership he displayed during this period and his 'efficiency in numerous combats with the enemy and his efforts have contributed materially to the successes obtained by his squadron'. Despite being posted, as acting Wing Commodore, to HQ 13 Group in late July 1940, Lees maintained an active flying role and was shot down on 2 September, during the closing stages of the Battle of Britain, suffering wounds in his arm and a leg. Mentioned in dispatches on 24 September 1941, Lees won a bar to his DFC in December 1941 for his great energy in leading 'sweeps over France ... at long distances out to sea and has set a magnificent example ... He has only one desire - to get to close grips with the enemy'. Lees' later career was a distinguished one. He was posted to the Middle East, commanding 234 Wing in operations supporting Operation Torch in Tunisia. In June 1943, he was made a Commander of Order of the British Empire for his services; two months later he was appointed aide-de-camp (ADC) to King George VI; in October 1944 he was selected as acting Air Commodore with the Mediterranean Allied Tactical Air Force. Ever energetic, Lees was mentioned in dispatches a further three times before the war ended. He continued his high-ranking career in the RAF, and was created Knight Commander of Bath in 1961, before his retirement from the RAF on 3 February 1966 with the rank of Air Marshal, when he moved back to Australia.