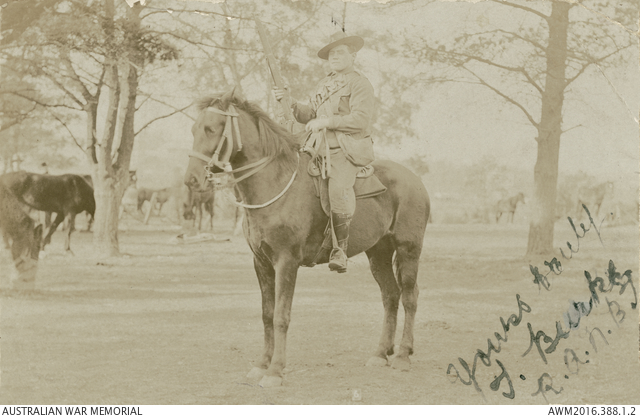 Informal portrait of 56 Able Bodied Driver (ABD) Edmond Burke, Royal Australian Naval Bridging Train (RANBT), on a horse. ABD Burke previously served with the number 705 as a member of the AN&MEF (1914-1915). Prior to the First World War he served with the number 1554 in the Royal Australian Navy (on HMAS Gayundah, Cerberus, Protector and Australia) and his home address was listed as Cahuenga Avenue, Los Angeles. The 1st Battalion, RANBT was disbanded in 1917 leading to Burke's discharge back in Sydney, NSW, in 1917. Following his discharge, Burke returned to Los Angeles and in July 1918 he joined the United States Army as a Sergeant with the 32nd Infantry, 16 Division, discharging in June 1919. Post war he worked as a fire fighter with the Los Angeles Fire Department (LAFD): Fireman Edmond Burke was appointed to the LAFD on 9 March 1920, then resigned on 10 June 1925. He returned and was reappointed as a Fireman on 1 March 1928 and remained until his Service Pension on 9 January 1943. He died in 1960 and was buried in the Los Angeles National Cemetery.