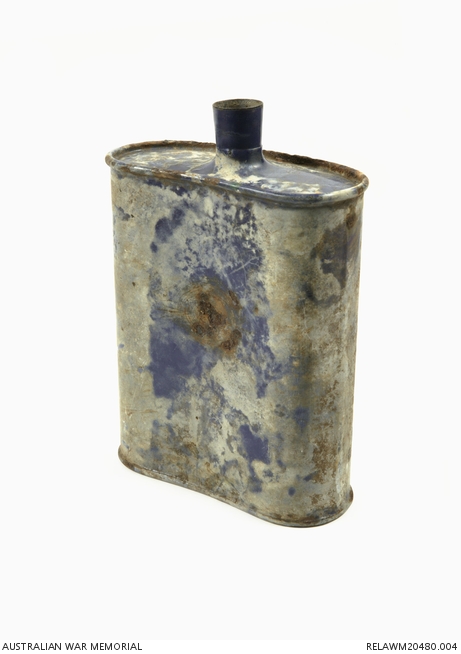 Blue enamelled Australian Army water bottle. The overall blue enamel surface has been abraded and leached by burial, and is almost white in colour. The bottle has a small hole and several areas of rust on the outer face, while the rear face has a central dent, the impact of which has caused cracks in the surrounding enamel. The cork stopper for the bottle is missing.

Australian Army enamelled steel water bottle collected from the site of the Laha massacre on the island of Ambon. The massacre of Australian Prisoners of War by the Japanese took place in 1942, and involved a number of men previously held at Tantoei camp, who were told that they were to be moved to a new camp, and were thus carrying all of their personal gear and equipment when executed. In forwarding the water bottle to the Australian War Memorial, the Commanding Officer of 1 Military History Field Team stated in his 1419/FM of 7 January 1946: 'As you are probably aware the Tantoei POW camp, where the bulk of the Australians on Ambon were imprisoned, was burnt to the ground two or three weeks after the occupation and no trace of it now remains. The whole area has been cleared and levelled off and is to be the site of the Australian war cemetery. The camp was also an Australian camp prior to the Jap occupation. Just beyond the edge of the cemetery site there is a concrete floor which was once the floor of the Australian guard house when part of the 2/21 Bn were camped there. The building was burnt down with the rest of the camp. I had a look through the ashes on the concrete but was only able to locate three titles AUSTRALIA which I am enclosing. On the other side of the bay at Laha between three and four hundred Australians were executed in three groups shortly after the surrender in 1942 and the bodies buried in four mass graves. They were disinterred a week or so before I arrived at Ambon and all personal articles discovered were reburied in the Aust war cemetery at Tantoei with the remains of the soldiers. I visited the site of the executions and picked up the above items which are forwarded herewith. It may be considered that the above relics are either too grizzly (sic) or too small for exhibitions. As, however, I was able to get so little, I thought it advisable to forward them to you for your consideration.'