Will you fight now or wait for this 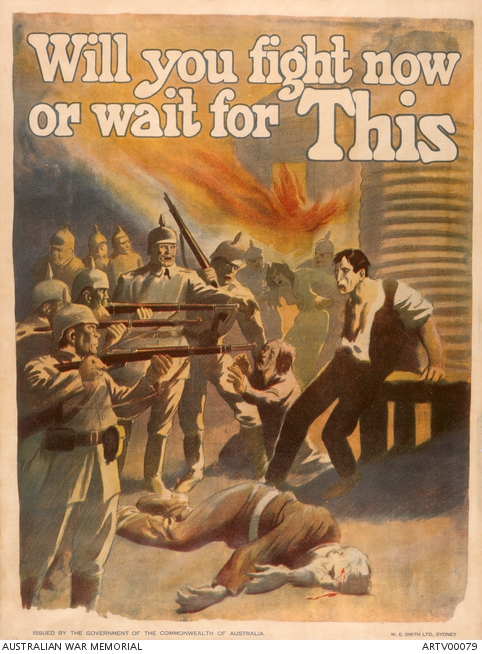 Australian First World War recruitment poster. This poster was part of the First World War Australian Government Recruiting Kit. Depicts a group of armed German soldiers threatening a young man pinned against a corrugated iron water tank. The other victims in this scene include an elderly man in the foreground, who has been shot, an elderly woman on her knees pleading with their captors, and a young woman in a state of half-undress who is being restrained by two German soldiers in the background. Recruitment posters were prolific in Australia throughout the First World War. Australia relied solely on voluntary recruits to serve in the AIF. Compulsory military service, or conscription, for eligible men was in force in Australia from 1911, however, these forces were for home defence and could not be used to serve in a war overseas.

Norman Lindsay (1879-1969) was a painter, draughtsman, illustrator, cartoonist, printmaker, writer and sculptor. He joined the Sydney 'Bulletin' magazine as a staff artist, 1901-09, 1910-23 and 1932-58. During the First World War he produced jingoistic cartoons and pro-conscription posters. The fourth of the series of six posters by Lindsay constituting the last nation-wide Australian recruiting campaign. This poster in particular illustrates how desperate the recruiting authorities were - the suggestion that Australia herself was threatened by an invading German army was ludicrous.