Letter from Thomas Charles Doe to his family, 1916 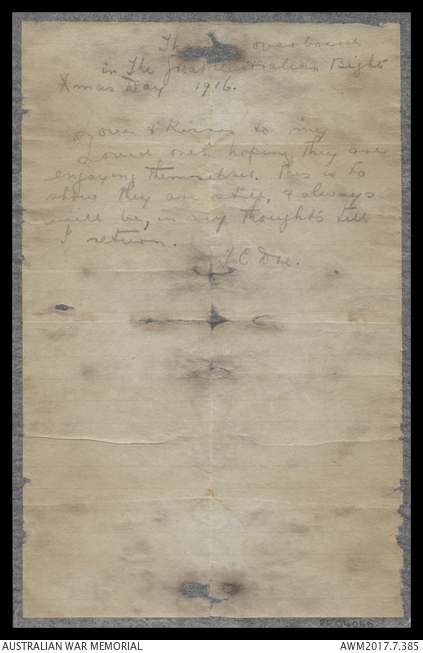 This collection consists of a one page letter that was written by Dvr. Doe and thrown overboard in a bottle. Dvr. Doe enlisted in Melbourne and embarked aboard HMAT Persic on 20 December 1916. While sailing across the Great Australian Bight on Christmas Day, he threw the bottle overboard. The single paged letter expresses Christmas sentiments to his loved ones. The bottle was discovered on Western Rock Beach, Port Sinclair, south of Penong in South Australia in 1968. The bottle was broken to extract the envelope inside. The envelope fell apart, but the letter was largely intact. The letter was returned to the family and later donated to the Memorial.

Driver Doe went on to serve in France. He survived the war and returned to Australia in 1919.