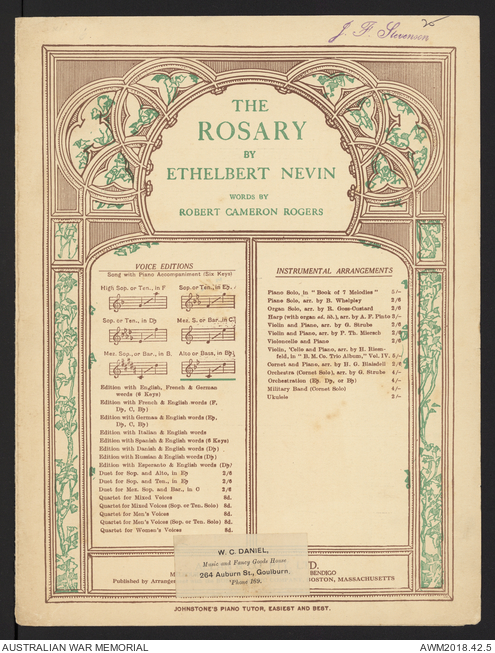 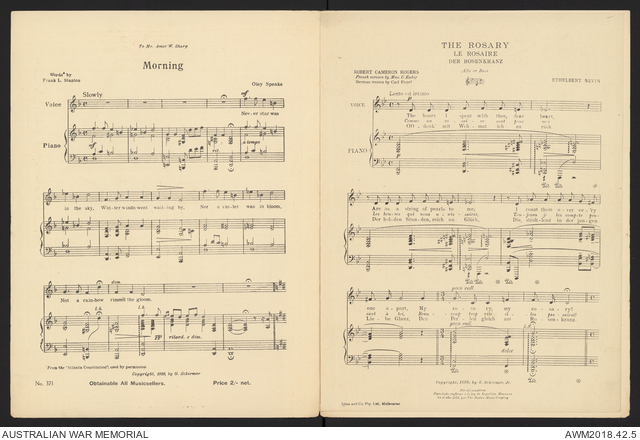 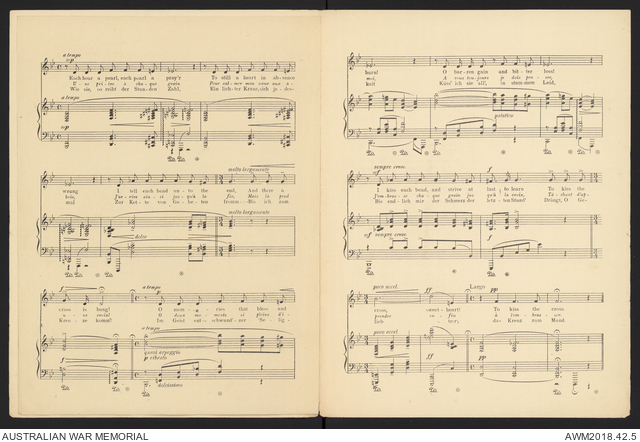 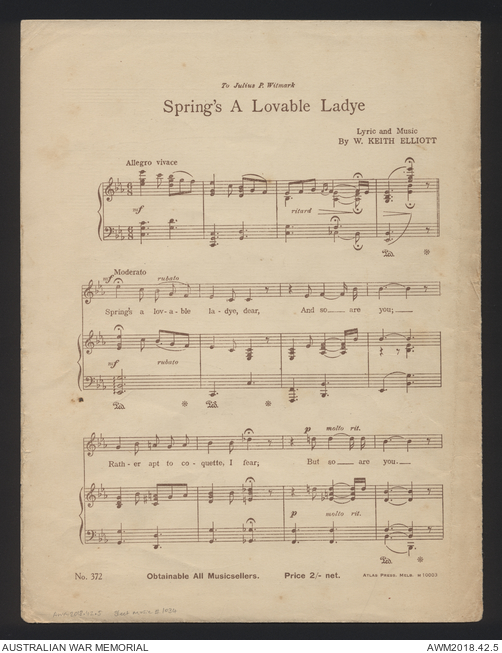 Sheet music for the song titled 'The Rosary', with music composed by Ethelbert Nevin and lyrics written by Robert Cameron Rogers. This copy, published about 1912, features an intricate design on the front cover that has been set into a decorative window frame. Inside the panes, appear the names of the composer and lyricist while other panes show the different keys and editions of the song for voice and instrumental arrangements. In the middle of the bottom of the front cover appears a sticker that indicates this copy was sold by W C Daniel, proprietor of the Music and Fancy Goods House in Goulburn, New South Wales. Inside the front cover of this copy is an advertising preview of the song titled 'Morning', with lyrics written by Frank Lebby Stanton and music composed by Oley Speaks. The back cover features an advertising preview of the song titled 'Spring's a lovable ladye', with lyrics and music written by W Keith Elliott.

While the lyrics appear to be written addressing an absent sweet heart, they are somewhat ambiguous, likely intentionally, and could also be interpreted as being sung to the rosary itself. Originally published in 1898, 'The Rosary' became one of the most popular songs of the early 20th century. The song was translated from the original English into French, German, Italian, Spanish, Russian, Danish, and even Esperanto. By the end of 1928, over 2.6 million copies had been sold. The song was performed by the baritone singer Frances Rogers at the Madison Square Garden Concert Hall on 23 February 1898. It was described in the papers the next day as "the hit of the afternoon".

Enthelbert Woodbridge Nevin was an American composer and concert performer who published over five hundred compositions during the course of his career. He was born into a musical family with his mother, a pianist, responsible for bringing the first grand piano over the Allegheny Mountains, part of the Appalachian Mountains, on the east coast of America. His father wrote music as a hobby and was a published composer. Nevin himself was a child prodigy who gave his first public concert performance at age 11 and his professional debut on 10 December 1886.

Robert Cameron Rogers was an American poet who wrote the lyrics for the poem 'The Rosary'. He was also the founding stockholder of the Central Bank of Santa Barbara and was known for his stone house set on a private lake in Mission Canyon, California. Another account reveals that the poem was published anonymously in the Washington Post newspaper and was actually written by Father Thomas Whalen. Whalen was a Catholic priest from Chicago who is reported to have written the poem after the death of his sister from tuberculosis.

The song titled ‘The Rosary’ was extremely popular at concerts and other musical events in Australia during the First World War. The popularity and availability of phonographs was still very much in its infancy during this period but ‘The Rosary’ was amongst the early phonograph records available for purchase in Australia. It was advertised during January 1915, with the recorded performance by Sergeant Charles Leggett, accompanied by the National Military Band of Britain, available on Edison Blue Amberol Records. Some sources regard Leggett as the world’s finest cornet soloist of his time.

Community bands often included it in their repertoire and this was the era when Sunday afternoon concerts by brass bands in the park were still very popular. Bandmaster Hall included this song for the first time in the program titled ‘Songs of Sunday’ presented by the Maryborough City Band on Sunday 13 September 1914. Mr H Gray performed ‘The Rosary’ as a solo during a concert by the Rozelle Champion Band at Birchgrove Oval during the evening of Sunday 21 February 1915. The Geraldton City Band organised a concert at the Geraldton Town Hall during February 1915 where the band performed ‘The Rosary’ with the report describing the song as ‘that gem’. Warnarmbool Citizens’ Band also performed The Rosary during a concert at the Warnarmbool Botanic Gardens on Sunday 2 July 1916. The event raised 6 pounds, 17 shillings and 9 pence for the French Red Cross appeal appeal.

This song was also very popular with touring concert parties during this period. A group known as The Musical Bachelors organised a concert that was held on 28 October 1914. A report of this event mentioned that Trooper Ludlow performed ‘The Rosary’ as an encore following his performance of the song ‘Thora’. Trooper Ludlow was Phillip Jesse Ludlow who enlisted with the Australian Imperial Force on 8 September 1915 but had previously seved with the Australian Light Horse, Colac Detachment, for three years. Ludlow served with the 8th Light Horse Regiment during the First World War. Miss Linda Bradford performed ‘The Rosary’ as one of two songs at a concert by Branscombe’s group of performers,The Dandies Concert Party, on Friday 22 January 1915.

The Cheer-up Hut Concert Party had the Department of Repatriation’s permission to organise concerts in aid of funds for the Cheer-Up Hut organisation. Performers associated with this group, Mr Sam Stanley and Mr Clement Crisp, performed ‘The Rosary’ as a duet during a concert at Broken Hill, New South Wales on Monday 23 September 1918. The concert party consisted of returned and rejected service personnel. Clement Crisp served with the 22nd Battalion during the First World War and returned to Australia on 19 October 1917 and was discharged in 1918 due to injuries sustained. Over a period of 10 months, the Cheer-up Hut concert party raised 2300 pounds for the Cheer-Up Hut movement.

Both professional singers and local entertainers performed ‘The Rosary’ at concerts organised for a range of reasons during the First World War. Mrs Maddrell performed ‘The Rosary’ as an encore after performing the Australian National Anthem during a concert at the Foresters’ annual reunion at the Oddfellows’ Hall, Orange on 16 September 1914. Miss Gill performed ‘The Rosary’ as one of two violin solos that she gave at the Dulwich Hill Political Labor League concert held at the Masonic Hall, Dulwich Hill on Wednesday 30 September 1914 with reports that the audience wanted more after her performances. Mr Walter Kirby performed ‘The Rosary’ as an encore in response to a special request to do so as part of the concert program he presented at the Hobart Town Hall on Saturday 13 February 1915. Railway men got together with local amateurs to present a patriotic concert at the School of Arts in Bathurst, New South Wales, on Monday 6 September 1915. Mr Paul Johnson performed two concert solos during the evening, with the first being the song ‘The Lost Chord’ and the second song ‘The Rosary’.

Fundraising events for the war effort, particularly for the Red Cross and the Belgian Relief Fund, often featured performances of ‘The Rosary’. A cornet solo performance of ‘The Rosary’ was given by Mr Grigsby at a concert during a concert organised by the Ararat and District Caledonian Society to raise money for the Belgian Fund. The concert was held on 20 November 1914 and raised approximately 12 pounds for the Belgian Relief Fund. A concert to support the Belgian Relief Fund was held at the South Brisbane Technical College Hall 1 May 1915. During the evening, two violin solos were performed by Mr Thurlow and one of these was ‘The Rosary’. Patriotic concert at Portland Library Hall on 14 January 1916 organised by Mr A Prince of Melbourne who was visiting the town at the time. The concert raised 21 pounds for the Red Cross with The Rosary performed by Miss V Jarrett.

Parodies were often written by soldiers during the First World War using the music of existing songs. British soldiers were reported to compose the following lines to the tune of ‘The Rosary’ in an article published by The Watchman on 2 September 1915: ‘‘The quids I’ve spent in thee, beer mart, had purchased strings of pearls for me.’ The article finished with the observation that the soldiers made the best of things: ‘His philosophy is if the pianist is bad and the singer a blinkin’ sight worse why, let’s forget both and concentrate on the song, and when the chorus comes round no one will be able to tell there’s a piano.’

Events held in honour of local men who enlisted during the First World War often mentioned performances of ‘The Rosary’ as part of their musical programs. This was the case at a concert and dance held at Traralgon, Victoria on 31 August 1918. The event was held in honour of Private William Edward Crowe who served with the 59th Battalion and was also a member of the battalion band. At the concert and dance held in his honour, although he did not return to Australia until 1919, a solo cornet performance of ‘The Rosary’ was given by Mr Miller Crowe who was accompanied on violin by Mr Lin Crowe. ‘The Rosary’ also featured at the welcome home reception for Corporal Kenneth Cole and Private W Black of Upotipotpon, at Caniambo, Victora on 17 January 1919. Another welcome home reception where ‘The Rosary’ was performed, occurred at the South Corowa Church on 15 September 1919. This event was held in honour of Private A Parnell, Private J Tracey, Private A Wise, Private E Parnell and Private T Simmons. Mr G Haig performed ‘The Rosary’ as a cornet solo during the musical program for the event. At Nairne, South Australia, it was determined that a welcome home reception would not be held until the last man had returned home from the war and this promise was kept and combined with the presentation of an honour roll to commemorate those who had served at the Oddfellows Hall, Nairne, on 20 February 1920. Approximately 25 returned soldiers attended with a number of others away from the area on the date of the event. Miss Rita Coonan performed ‘The Rosary’ as part of the evening’s musical entertainment. The honour roll presented during the evening measured 7 feet and 6 inches by 6 feet and 10 inches and was made by Messrs A Pengelley & Co of Adelaide.

This was also a very popular song at concerts organised and attended by Australian service personnel during the First World War. Henry Chandler performed this song at a concert by the 3rd Company, Field Engineers, aboard HMAT Geelong on 21 November 1914. Gunner William Jamieson was another to perform this song at a concert aboard HMAT Orsova on Saturday 30 July 1917. Others to perform this song on troopships during the First World War period were Staff Sergean Dodd Alfred Mehan on 1 July 1916 aboard TSS Demosthenes; Gunner Charles Oscar Rembert aboard HMAT Port Napier on 25 May 1919; and Gunner Alfred Vinning aboard HMAT Shropshire on 3 April 1915.