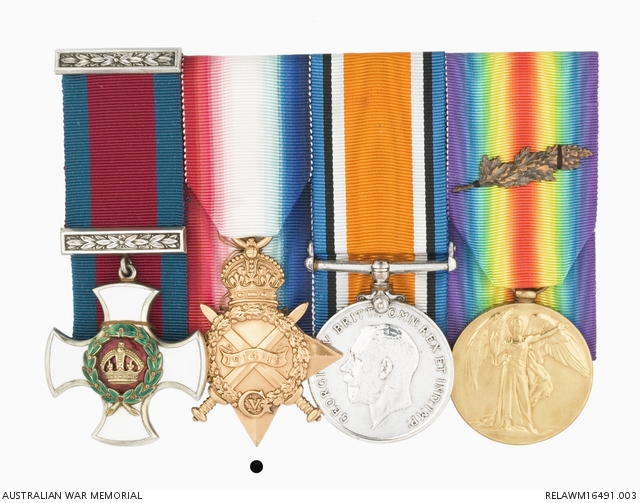 Associated with the service of Lieutenant Alexander W L MacNeil, DSO. Born in Inverness, Scotland on 24 August 1892, MacNeil immigrated to Australia in 1912 and was employed as a boiler maker at the outbreak of the First World War. On 29 August 1914 he enlisted in the AIF as a private with 10 Infantry Battalion at Morphettville, South Australia and received the regimental number 746. In October, MacNeil sailed for Egypt and spent some months training in Cairo before embarking for Turkey where his battalion formed part of the covering force for the ANZAC landing on 25 April 1915. 10 Battalion were amongst the first ashore at around 4.30 am, and was heavily involved in establishing and defending the front line of the ANZAC position. MacNeil served throughout the Gallipoli campaign during which he was promoted to sergeant on 19 August. After the withdrawal from Gallipoli in December, 10 Battalion returned to Egypt and, in March 1916, sailed for France and the Western Front. MacNeil was promoted to Lieutenant and in mid June was wounded in action at Fleurbaix when a piece of shrapnel passed through a notebook carried in his breast pocket and deflected down into his abdomen. Transferred to 3 Australian Light Trench Mortar Battery in January 1917, MacNeil was awarded the Distinguished Service Order for his brave actions on 6 May against a German attack on the Hindenburg Line east of Bullecourt. He later went on to train at the Southern Command Bombing School, Lyndhurst and qualified as an instructor in November. MacNeil returned to his original unit, 10 Battalion, and was discharged on 3 February 1919 though he remained in Britain for some years before returning to Australia in 1922.