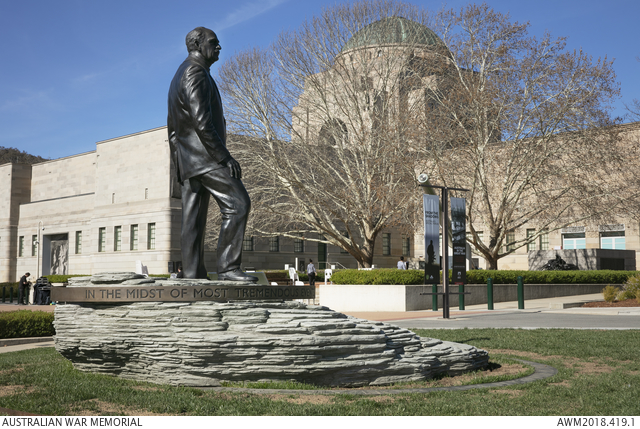 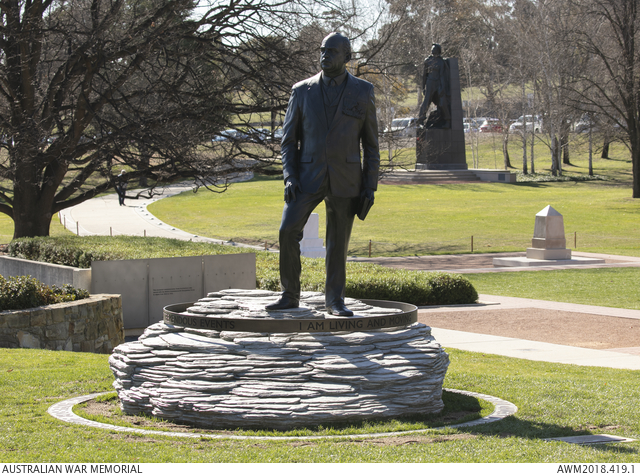 ‘This work—a collaboration between a sculptor and poet—combines the language of figurative statuary with text drawn from General Sir John Monash’s writings to honour one of Australia’s greatest military and civic leaders. The sculpture depicts Monash as the stable axis of a world in flux, a pivotal driver of Australia’s war efforts, and a powerful witness to the ‘tremendous events’ of the early twentieth century’. Charles Robb and Sarah Holland-Batt, 2018

This sculpture was commissioned in 2016 to commemorate Sir John Monash’s legacy as an outstanding general of the First World War and his dedication to civic duty in the years after the war. It comprises of a larger than life size bronze realist figure of the older Sir John Monash clothed in a suit and displaying his military medals, gazing outward on top of a plinth cast in cement to resemble a large outcrop of striated sedimentary rock.

Monash stands with one foot placed on a rocky rise, signifying his commanding view of Australia’s destiny in its global context. The strength of his gaze and purposeful profile signifies his vision and leadership. His clothes intimate that he was a man of his time, however, the inclusion of the phrase “I am living and moving” asserts Monash’s continuing centrality to Australian cultural life, the way his legacy still lives and moves in us today. He holds a notebook in his right hand, alluding to his great intellectual legacy as a moving and humane chronicler of the war, as well as one of its greatest tacticians and leaders Symbolically, the rock functions both as a testament to Monash’s intellectual strength and fortitude, but also to the burden of responsibility that fell to him during his service and public life. The concrete plinth also gestures towards Monash’s pioneering work as an engineer in introducing reinforced concrete as a material in construction.

The modelling of the figure and fabrication of the plinth was carried out in the Visual Arts Workshops at Queensland University of Technology over a period of 4 months from October 2017. The figure and rings were cast in bronze at Billman’s Foundry, Castlemaine, Victoria in March 2018.