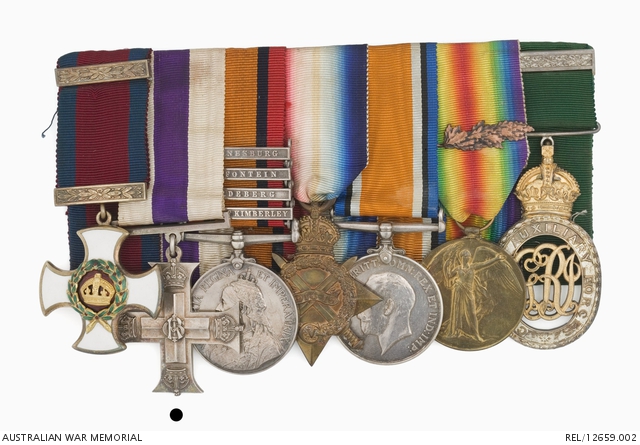 Joseph Espie Dods was born in London on 29 June 1874 and arrived in Brisbane as a young child. After studying at Brisbane Grammar, Dods travelled abroad to complete a Bachelor of Medicine and Bachelor of Surgery in Edinburgh before completing postgraduate studies in Public Health in Dublin.

Dods returned to Brisbane and joined the Army Medical Corps as a captain in 1899. He was attached to 1 Queensland Mounted Infantry and left Australia for service in the Boer War on 1 November. Arriving at Table Bay on 12 December and landing at Cape Town the following day Dods served with 1 Queensland Mounted Infantry for twelve months and was present at the Battle of Sunnyside, the Relief of Kimberley and the occupation of Bloemfontein as well as a number of other significant actions. The unit returned to Australia in December 1900 and arriving in Brisbane on 17 January 1901.

Dods was appointed Government Medical Officer, Brisbane and was serving in that capacity at the outbreak of the First World War. Enlisting in October 1914 Dods was appointed Medical Officer of 5 Light Horse Regiment, and embarked for overseas service with that unit aboard HMAT Persic on 21 December 1914. Serving on Gallipoli from May 1915, Dods suffered severe wounds to the shoulder on 29 August. He was evacuated off the Peninsula aboard the Hospital Ship Gloucester Castle and taken to 21 General Hospital, Alexandria. He was transferred to 1 Red Cross Convalescent Hospital, Bukeley where he was discharged for duty on 12 October and returned to his unit on 4 November.

Present at the final evacuation Dods was awarded a Military Cross for his gallant service on the Peninsula. The recommendation for this award reads ‘Since his arrival on the Peninsula on the 20th May, until his departure (wounded) on the 29th August, he has carried out his duties as Medical Officer with conspicuous gallantry. Our reserve camp has been shelled on many occasions, resulting in casualties. Capt. Dods has never waited for these to be brought to him, but has gone into the open to attend to them at personal risk from continued shelling. On 28th June, when the Regiment had many casualties, Capt. Dods attended to all the wounded, himself being under heavy shell fire the whole of the time. On 29th Aug. when our camp was being heavily shelled, Capt. Dods left cover to attend to a wounded man and was immediately struck down with shrapnel.’

Dods award was gazetted on 1 January 1916. That same day he was promoted to major and appointed Deputy Assistant Director Medical Services (DADMS) of 1 Division. Transferring to Headquarters 1st Australian Division on 8 January he was Mentioned in Despatches on 28 January before leaving Egypt in March for the Western Front.
During the Battle of Pozieres Dods was responsible for organising the thousands of casualties from the Division. For these actions he was awarded the Distinguished Service Order. He also received a second Mention in Despatches and was appointed lieutenant colonel on 27 January 1917. Relinquishing his appointment as DADMS Dods was transferred to England for return to Australia. Arriving in Melbourne on 12 April his appointment in the AIF was terminated on 28 April.