Page 15 of an album of photographs either taken or collected by Roy Cecil Phillipps (later ... 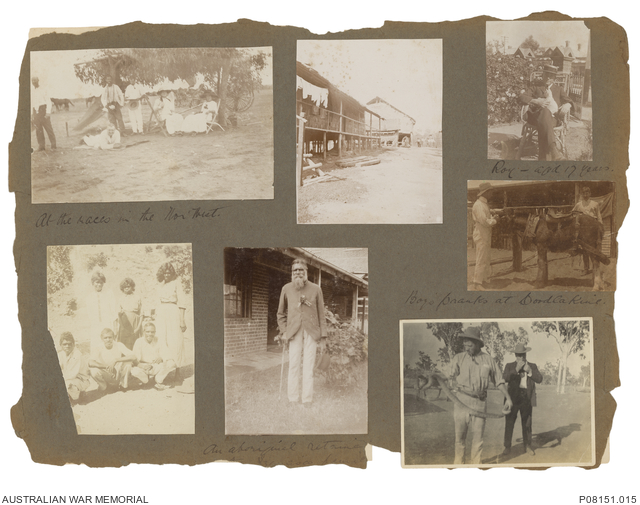 Page 15 of an album of photographs either taken or collected by Roy Cecil Phillipps (later Squadron Leader R.C Phillipps MC & Bar DFC) when employed by the pastoralist firm Connor, Doherty & Durack Ltd in the Kimberley region of Western Australia from 1912 until his enlistment in the AIF in April 1915. The photographs were sent to his mother in Perth, Mrs Cecil R. Phillipps, who arranged them in an album and wrote the accompanying captions. Images are of:"At the races in the Nor' West" (album caption); a local village in the Philippines; "Roy - aged 17 years" (album caption); "Boys pranks at Doodlakine" (album caption); Informal outdoor portrait of six Aboriginal men and women, likely to be domestic maids and helpers (see P08151.015.005); "Aboriginal retainer" (see P08151.015.006) and two stockman with a snake.