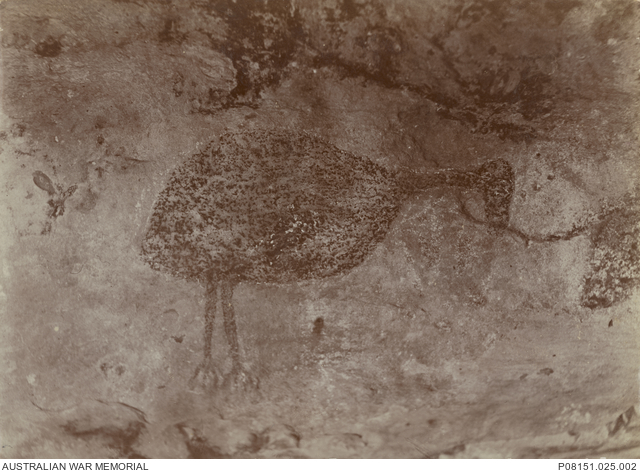 "Aboriginal rock carvings". Aboriginal rock art captured by Charles Price Conigrave, leader of the Kimberley Exploring Expedition in 1911-1912, most likely the depiction of an emu in the recognisably Mowanjum art style. The Worrorra, Ngarinyin, and Wunumbal tribes make up the Mowanjum community, outside Derby, Western Australia. One of a series of photographs collected by Roy Cecil Phillipps (later Squadron Leader R.C Phillipps MC & Bar DFC) when employed by the pastoralist firm Connor, Doherty & Durack Ltd in the Kimberley region of Western Australia from 1912 until his enlistment in the AIF in April 1915. The photographs were sent to his mother in Perth, Mrs Cecil R. Phillipps, who arranged them in an album with captions.