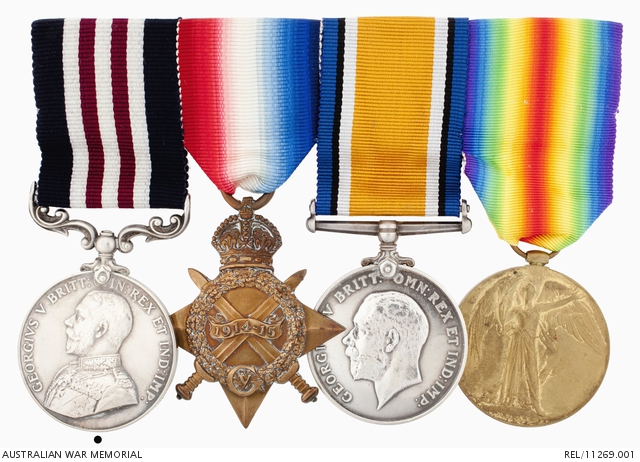 Awarded to Lieutenant W G Scales, 24th Battalion, AIF. Born in Mitta Mitta, Victoria in 1895, William Gordon 'Bill' Scales was working as an axeman when he enlisted in the AIF on 12 June 1915. 1737 Private W G Scales embarked aboard HMAT Demosthenes in Melbourne on 16 July 1915 with the 2nd Reinforcements to the 24th Battalion. Private Scales served on Gallipoli and went with the 24th Battalion to the Western Front in March 1916.

Scales was awarded the Military Medal for his actions during the Second Battle of Bullecourt. The citation reads, 'For conspicuous gallantry and skill in leading his men during the capture of the trenches near BULLECOURT on 3rd May 1917. Later he led bombing parties on both flanks in turn to repel counter attacks with great success inflicting severe losses on the enemy'. Scales was promoted to 2nd lieutenant and transferred to the 21st Battalion soon after this action.

On 4 October 1917, during the heavy fighting at Broodseinde Ridge near Ypres, Belgium, Scales received several gunshot wounds which led to the amputation of his right leg in early 1918. He returned to Australia aboard SS Malta in September that year.