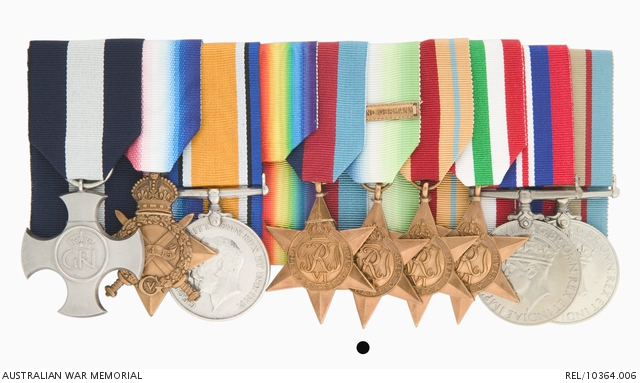 George Manley Dixon was born at Woodford, Essex, in the UK, in December 1899, and was working as a farmer at Brighton, in the south east of Tasmania, when the First World War commenced. Lying about his age (he claimed to have been born in 1895, making him 19, when he was in fact only 15) he enlisted in the AIF in September 1914, and became an original member of C Company, 12 Battalion, with the service number 529. Dixon was one of those who landed at Gallipoli before dawn on 25 April 1915, but only a week later, on 2 May, he was severely wounded in the left forearm, wrist and foot, and was evacuated. He was also suffering from tuberculosis, and considered 'dangerously ill', was quickly transported to Malta, and then to England, where he made a slow recovery. As it was not considered that he would ever be fit for further service, he was returned to Australia and discharged at Sydney in July 1916. Dixon subsequently married and settled in Sydney. In September 1940, he enlisted in the Royal Australian Naval Volunteer Reserve, and was granted a commission as probationary sub-lieutenant. He embarked for England later the same month, and after completing his training, held command of a number of small vessels. In July 1943, he was appointed to command the British Landing Ship Tank (LST) 409 with the rank of acting lieutenant commander. He was awarded the Distinguished Service Cross for his handling of this vessel during 'Operation Husky', the Allied invasion of Sicily, although the award was not announced until 1945. Dixon continued to command LSTs for the remainder of the war, and was present at the Normandy landings in 1944. He remained in the navy until 1957, taking HMALST 3501 (later renamed 'Labuan') to the Antarctic in 1947-48 and 1948-49, as a result of which Mount Dixon on Heard Island was named after him. George Dixon eventually retired with the rank of lieutenant commander RANVR in 1957, and died in August 1978.