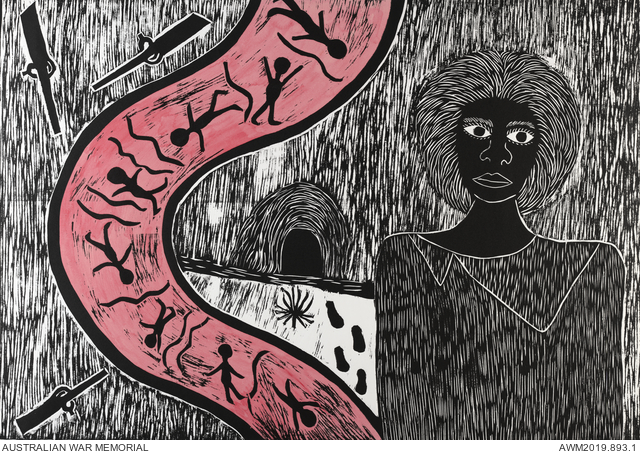 'Quirriup' is a 2011 artwork by Laurel Nannup (b. 1943), an important and established Noongar printmaker and artist from Western Australia. Born in Carrolup in 1943, Nannup is a member of the Stolen Generation, and grew up in the bush around Pinjarra until she was taken at 8 years of age to the Wandering Mission. Nannup told her story in an art exhibition in 2012 with Art on the Move called 'A Story to Tell'.

Nannup was invited with 17 other artists, to visually interpret the event of the Pinjarra massacre, or Nyungar life before/after specifically for inclusion in the Pinjarra Massacre Memorial exhibition of 2011. Out of all the men, women and children who were victims of the Pinjarra massacre, research had uncovered 21 victims by name and each artist adopted one or more of these names, giving each of the 21 artworks created special significance. The artwork that each artist produced thus stood as a monument to honor that victim. This woodcut print depicts the figure of Murray female, Quiriupp.

The Pinjarra Massacre, also known as the Battle of Pinjarra, was an attack that occurred at Pinjarra, Western Australia, on a group of up to 80 Noongar people by a detachment of 25 soldiers, police and settlers led by Governor James Stirling in October 1834. It is considered one of the most notorious massacres carried out on Aboriginal people during the Frontier Wars, particularly due to the calculated nature to which it was planned. The massacre was made in response to continuing requests for military protection from a small group of settlers on the Murray River, and followed a series of confrontations in the early days of the Swan River colony that had culminated in the payback killing of an ex-soldier.

The Aboriginal settlement at Pinjarra was some 80kms south of the Swan River settlement. Stirling’s plan was to punish any Aboriginal in the local area in an effort to drive home the message that the settlers and their cattle must not be attacked or killed. One account of the massacre explained the rationale for the attack as simply that the moment was considered favourable for punishing the perpetrators of such acts.

Stirling had wanted to begin preparations for the Noongar executions on 17 October, but a Murray man seen in Perth was suspected of being a spy for the Calyute people, and so the expedition was delayed one week. On the morning of 25 October, Stirling and his attachment left Perth, regrouping with mounted police at Thomas Peel’s homestead, Clarence. On the morning of 27 September, ten soldiers of the 21st Regiment, two Corporals and eight Privates, arrived at Peel’s; ammunition was then issued to the party, and they were issued with several weeks' worth of supplies, as the soldiers were to remain at Pinjarra and establish a garrison. The group left Peel’s, and camped at Jinjanuk, 10 miles from the mouth of the Murray river, so that they could begin the attack in the early morning.

Waking two hours before dawn on the 28th of October, they rejoined the Murray where they would attack. At around 8.35am, the attack began on the Aboriginal camp from both the north and south. The Aboriginal people, sensing trouble, tried to flee into the bush, and women and children tried to escape by crossing the river, however Stirling’s divided party caught them at the river crossing and as they neared the bush. When the Aboriginal men raised their spears and woomeras, Stirling and his men opened fire.

On the settler’s side, a corporal was wounded in the arm, but recovered, and Captain Theophilus Ellis suffered a concussion, either from a glancing blow from a spear or from the fall off his horse, and later died on 11 November, having been in a coma for two weeks. On the Aboriginal side there are conflicting reports of casualties, but numbers suggest 60-70 Aboriginal men, women and children in the camp were brutally murdered.

Of her work, Nannup said: “I am honoured to be involved in the Pinjarra Massacre Memorial project. When I was a small girl growing up in the Pinjarra district my family would often talk about and tell stories of the massacre, I had often wondered what happened to all the Old People who survived the massacre. This project has helped to give me a chance to tell a story and interpret the massacre through my families’ stories over the many years. My artwork of Quiriupp represents a woman who was present at the time of the massacre. The story depicts a lone figure standing in front of her mia-mia next to a river of blood and a sea of floating bodies. I would like this exhibition to acknowledge my ancestors who died in struggle of this great tragedy and for this event to be in the minds of all Australians so that we can all learn from the mistakes of the past" (Artist statement for 'Quiriupp', Pinjarra Massacre Memorial exhibition, Art on the Move, 2011).