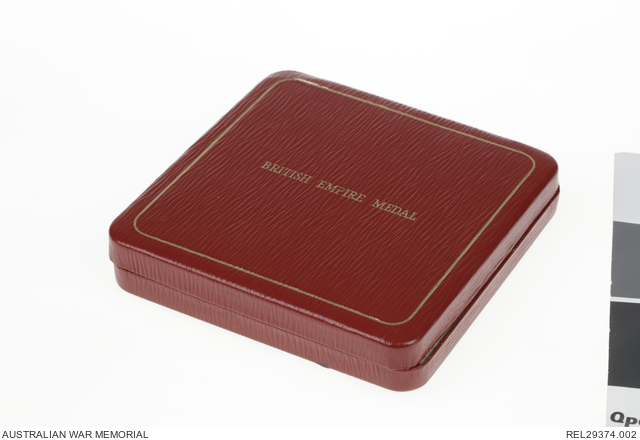 Awarded to Margaret Hope Maberley Gordon who survived the sinking of the passenger ship SS City of Cairo in the South Atlantic in 1942. The ship sailed from Cape Town, and was torpedoed by a German U-boat on 6 November. When the ship was abandoned Mrs Gordon found a place in lifeboat No. 4. Her husband drowned when the vessel sank.

She and the ship's Third Officer, James "Knocker" Whyte, were the only occupants of the lifeboat to reach safety, when they were rescued off the coast of Brazil, 52 days later on 27 December. The other 15 occupants of the boat died during the time at sea. Mrs Gordon later joined the Women's Royal Naval Service and returned to Australia in 1946.

On 27 September 1944 in New York, Mrs Gordon was presented with the British Empire Medal for her gallantry during the ordeal. The citation reads 'The ship, sailing alone, was torpedoed in darkness. She sustained heavy damage and commenced to settle rapidly by the stern. When it was seen that the vessel could not be saved, abandonment was ordered. Many passengers and members of the crew were rescued from the sea during the night and distributed into six boats which set a course for land, 480 miles away. The Third Officer was in charge of a boat which parted company with the others after seven days. As there were no navigational instruments in this boat, land was missed and the boat was adrift for 52 days. Great suffering and hardships were endured and when the boat was eventually picked up only the Third Officer and a passenger, Mrs. Gordon, remained. Mr Whyte never gave up hope during this tremendous ordeal and, by improvisation and repairs, he kept the boat afloat and sailing. His courage and resource were outstanding. Mrs Gordon showed exceptional qualities of fortitude and endurance. When the occupants of the boat died one after another, she did all in her power to allay their sufferings. Towards the end of the voyage she kept watch with the Third Officer in sailing and steering the boat.'