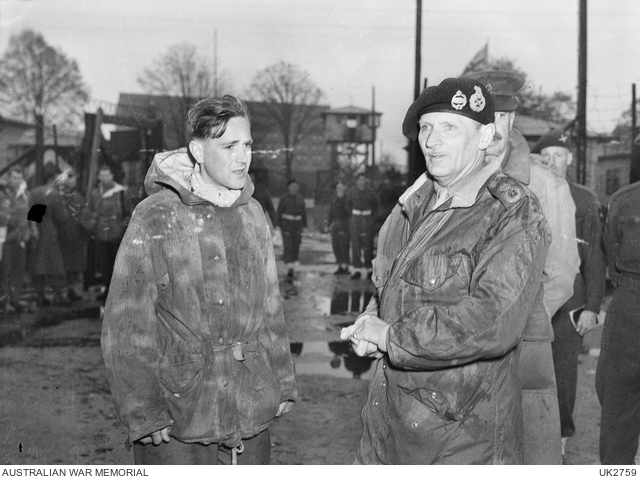 Oerbke. Inspecting prisoner of war (POW) camp Stalag 357 shortly after its liberation by units of the 2nd British Army, Field Marshal Bernard Law Montgomery talks to RAAF POW 417152 Warrant Officer R. S. Bray of Adelaide, SA, a member of 466 (Halifax) Squadron RAAF with Bomber Command. He had baled out over Frankfurt 13 months earlier from a stricken RAAF Halifax bomber aircraft. Stalags 357 and XIb (at Fallingbostel) were found by the British to be virtually Anzac prison camps. Many AIF men (some taken prisoner in Crete) and RAAF and New Zealand Air Force men were freed. British Army men actually caught up with parties of Anzacs being force marched away from the camps. The ex POWs returned to spend their last night in the camps and await transport to Britain. They were issued with tents, as their quarters were found to be uninhabitable. Of note is that Warrant Officer Bray appears to be wearing a captured German Wehrmacht reversible camoflage smock whilst he is talking to 'Monty'.