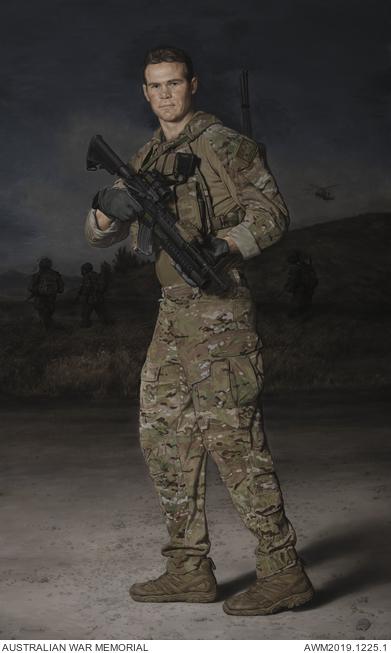 Corporal Cameron Stewart Baird VC MG was killed in action on 22 June 2013 in Afghanistan. In 2014 he was posthumously awarded the Victoria Cross for Australia, the nation’s highest honour. Corporal Baird was Australia’s last battlefield casualty in Afghanistan.

Cameron Baird joined the army in 2000, aged 18. He was awarded “most outstanding soldier” at his passing out parade and graduated into the 4th Battalion (Commando), the Royal Australian Regiment, now the 2nd Commando Regiment. He served in East Timor and Iraq before deploying to Afghanistan between 2007 and 2013.

Baird was described as a compassionate, courageous and gentle man. Before joining the army, he was an elite AFL player. As a soldier, he was respected for his disciplined aggression and speed in battle. His fellow soldiers sometimes struggled to keep up with him.

After Corporal Baird’s first operation as a team commander he was awarded the Medal for Gallantry. Then a lance corporal, Baird was leading a platoon that came under fire and his friend Private Luke Worsley was killed. Baird quickly recovered Private Worsley and led his team to regain control of the fight. The citation for his honour credits him with “undoubtedly preventing further members of his section from becoming casualties.”

In June 2013 Corporal Baird again demonstrated extraordinary leadership and skill. While leading his team in an attack on an insurgent network, Baird became aware that a team nearby was under heavy fire and needed support. Its commander had been shot and required urgent medical care. Despite being ambushed, Baird led his soldiers to isolate a group of heavily armed enemy in a room within a compound. Facing unrelenting gunfire and with ammunition running low, Baird knew that the situation was dire and decisive action was needed. He twice charged the doorway. On his third attempt, he successfully charged the doorway and killed an enemy. In doing so, he gained an advantage for the platoon but lost his life. For his actions on this day, Corporal Baird was awarded the Victoria Cross.

This portrait shows Baird as a soldier in the pre-dawn light of Afghanistan, waiting for helicopter extraction. In front of him are three fellow commandos. Corporal Baird is the last to arrive at the landing zone, protecting those ahead of him.

Marcus Wills painted this portrait after talking with Baird’s family and friends, and conducting extensive research.

“I couldn’t travel to Afghanistan, nor could I meet Cameron, but I hoped to absorb something from afar. I thought that perhaps through research and talking with people who knew Cameron, I might be able to glean something which feels authentic … From what I could learn about Cameron, he was respected for ‘leading from the front’. I thought about how he might like to be portrayed and how his family and the men who served with Cameron might wish to see him.”

Wills’ research included viewing a demonstration of 2nd Commando Regiment capabilities and taking advice from soldiers in the Regiment about Baird’s uniform and equipment.

“I made every effort to depict Cameron in the attire and equipment he used in Afghanistan, and I’m grateful to Cameron’s colleagues at the 2nd Commando Regiment who helped me achieve this. This accuracy was important to me, and a couple of men who fought alongside Cameron told me that ‘the gear has to be right’.”

Wills made the painting using a traditional method of egg tempera and oil paint on linen. Egg tempera is an ancient form of paint-making, with powdered pigment mixed with egg yolk, oil and water to create a lustrous, quick-drying paint. This technique has been used by artists including Leonardo da Vinci and Sandro Botticelli. Wills scaled the painting’s height and width using the golden ratio. This mathematical formula of 1 to 1.618 is referred to as the “divine proportion”. It has been used throughout Western art history to produce visual harmony. The golden ratio is related to the Fibonacci sequence, a spiral pattern found in nature including seashells and tree branches. While using traditional European forms of art-making to create the painting, Wills’ portrait emphasises Corporal Baird’s lineage as an Australian soldier.

“I looked at lots of images of Australian soldiers, from the First World War through to the Vietnam War and present day. One of the things that stood out to me was that Australian troops seem to have a distinctive quality. I’m not sure what it is, or if I was seeing something only because I was looking. I hope that my portrait of Cameron possesses that timeless quality, whatever it is.”