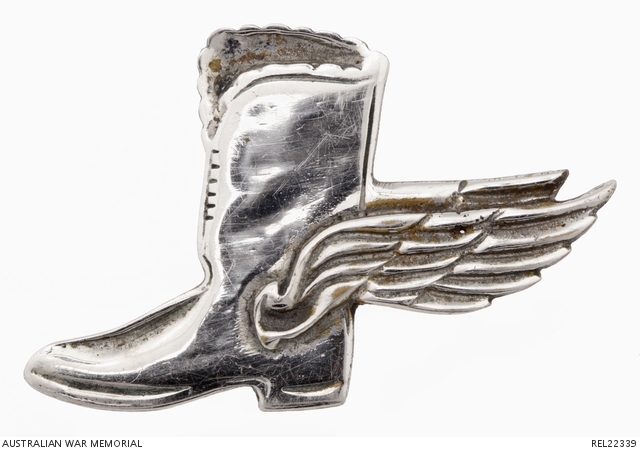 Silver metal flying boot with a pair of wings on the heel. Two metal loops at the rear for fixing to the uniform.

Awarded to Flight Sergeant Herbert Leonard (Nick) Bertram of 458 Squadron Royal Australian Air Force (RAAF) for succeeding to return to his squadron after successfully abandoning his Vickers Wellington Mk VIII aircraft in the Mediterranean on the 27th February 1943.

At the time of the ditching into the Mediterranean Sea they were conducting an Anti-submarine mission. Due to engine problems they were forced to ditch, with all crew making it into a dinghy. After three hours 'in the drink' they were rescued by the merchant ship SS Destro and taken to Alexandria harbour in Egypt.

Bertram was born in Adelaide, South Australia on 29 February 1916, the first child and only son of Herbert and Olive Bertram. He attended Richmond State School and after leaving school he became a scales mechanic for Avery Scales. He enjoyed motorcycle speedway racing at Camden Motordome and became well-known in the sport before he enlisted into the RAAF on 29 April 1940 in Adelaide. His listed next of kin was his mother, Olive Bertram and the service number allocated to him was 407025.

After graduating the required training courses in Ballarat Victoria and Evans Head NSW he served in North Africa and the Middle East as a Wireless Operator/Air Gunner initially with No.117 Squadron Royal Air Force (RAF) and later with No.458 Squadron RAAF. In November 1944 he was promoted to Flying Officer and posted to No.459 Squadron RAAF as a Pilot.

During his flying career Bertram survived two forced landings, one in the North African desert whilst with 117 Squadron RAF and the other in the Mediterranean Sea whilst posted to 458 Squadron RAAF. The later seeing him earn the coveted 'Goldfish Club' for surviving a ditching in the sea in addition to his 'Late Arrivals Club' badge as seen here.

In August 1945 he married Eileen Joyce Anderson at Pirie Street Methodist Church in Adelaide. He discharged from the RAAF whilst serving with 459 Squadron at the rank of Flying Officer on 5 September 1945. Later in 1949 Nick and Joyce (as she was known to her family) welcomed their son Howard.

Among the many different aircraft types that Bertram was involved with include the Bristol Bombay transport aircraft, DC-3 (C-47) transport, Lockheed Hudson, Avro Anson, Fairy Battle (training in Australia) and the Vickers Wellington bomber (25 sorties) and Martin Baltimore bomber (as pilot).

Post-war Nick ran a successful engineering business in Keswick, Adelaide, among their products including the external light fittings for the Royal Adelaide Hospital.

In addition to his successful business Bertram continued his love of flying and he took up glider flying in the mid-1950's, being a founding member of the Great Eastern Gliding Club. On 17 October 1959 Nick was involved in a fatal gliding accident near Murray Bridge, South Australia and he was interred at the Centennial Park Cemetery.

The Late Arrivals Club was formed in the Western Desert during the Second World War for allied airmen who returned to their Squadrons from behind enemy lines. Members were awarded a certificate congratulating them for returning to their squadron after enemy action, on foot or by other means, well after their estimated time of arrival, and contained the slogan "It is never too late to come back." The silver membership badge was in the form of a winged flying boot, which was embroidered or cast in silver, designed to be worn on the left breast of flying suits.