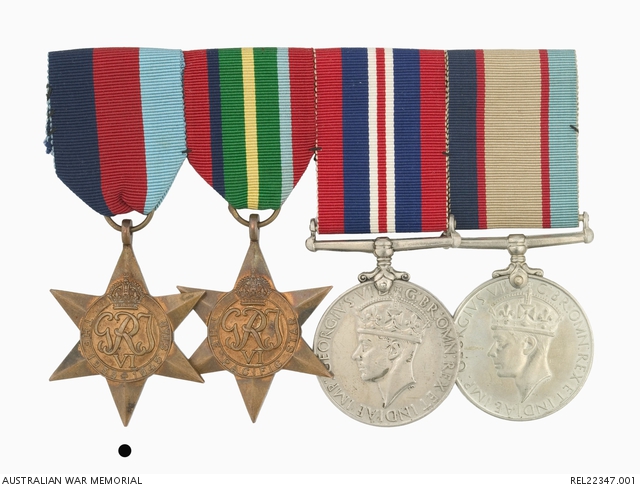 Awarded to S/7011 Sick Berth Attendant (SBA) John Cameron Bryant for his service in the Royal Australian Navy in HMAS Koopa. Born in Cowra, NSW in 1924, Bryant enlisted in the Navy on 9 August 1942. After initial training at Flinders Naval Depot in Victoria he was posted to HMAS Koopa as the only sick berth attendant among the crew of 45. The Koopa, built in 1911, was a coal fired Moreton Bay ferry when she was requisitioned by the RAN in August 1942. From late 1942 to mid-1943 the Koopa was used as a training base in Queensland waters for United States Marines practising combined operations landings and assaults using collapsible boat. Subsequently it was decided that the Koopa would provide mobile repair facilities to RAN Fairmiles launches, and other small craft deployed to northern New Guinea, and she was converted into a repair workshop, as well as carrying spare parts, ammunition and fuel for the Fairmiles. Many of the crew were specialised tradesmen. The Koopa was at this time given her nickname 'The Ark'. The ship served as a Fairmile mother ship at Milne Bay, Madang, Alexishafen and Mios Woendi in Geelvinck Bay, near the north west tip of Dutch New Guinea. At Mios Woendi she was attached to the US 7th Fleet as it prepared for the Philippine landings in late 1944 and serviced eight RAN Fairmiles, equipped with ASDIC, engaged in night patrols against enemy submarines.The Koopa did not move to the Philippines because of the problem supplying her with coal. The ship returned to Brisbane in February 1945. John Bryant was discharged in September 1946.