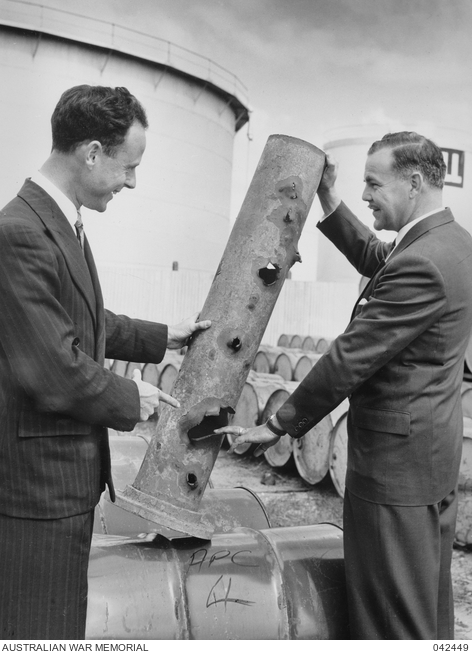 Mr D Erskine (right) and Mr J Browning of the Shell Oil Company inspect a bullet riddled piece of pipeline from the Company's tanker Ondina which was found in a North Fremantle boilermaker's yard. On 1942-11-11 the tanker, escorted by a minesweeper, was attacked by the Japanese raider Kikoku Maru about 1400 miles from Fremantle and with her one gun she sank the raider. A second Japanese raider, the Kunta Maru, appeared and blasted the escort into a hulk. The Ondina fought until her last round was fired and then the Captain stopped engines and ordered "Abandon Ship". Ignoring this the raider continued shelling the vessel and finally torpedoed her. After the raider left the scene the tanker's surviving crew members boarded Ondina, extinguished the fires, righted her list and sailed her back to Fremantle. Six of her crew were decorated - including Captain W Horsman, posthumously. (Donor Shell Oil Company)