Wallet 1 of 1 - Letters from Albert Jacka relating to his wounding at the Battle of Pozières and recommendation for the Distinguished Service Order, 1916 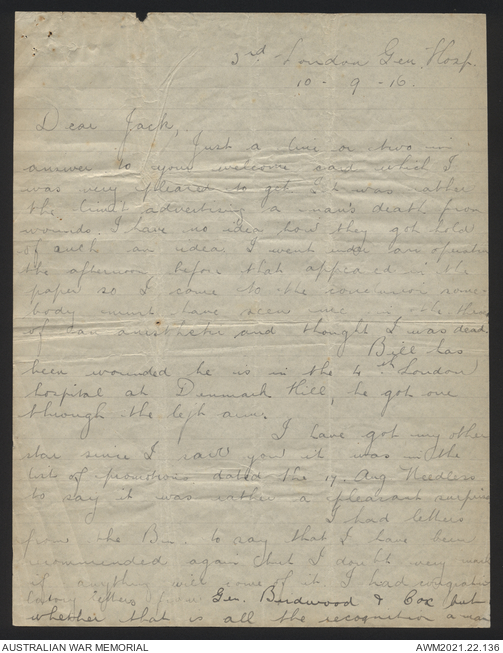 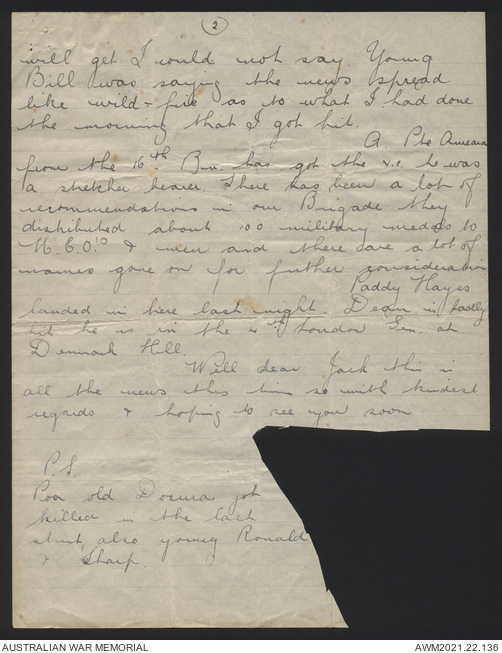 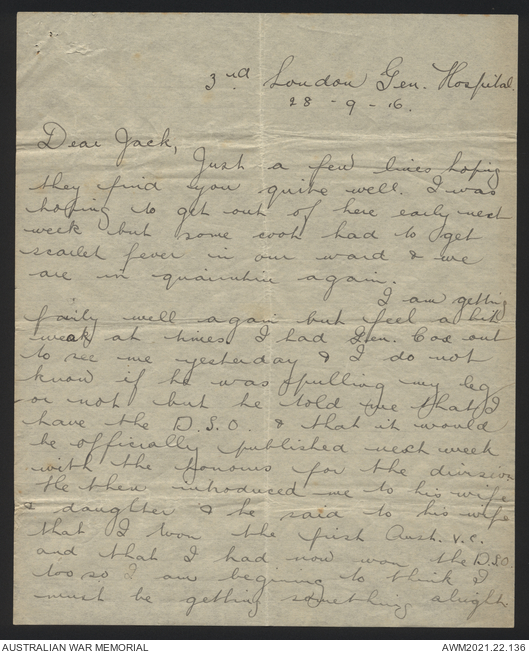 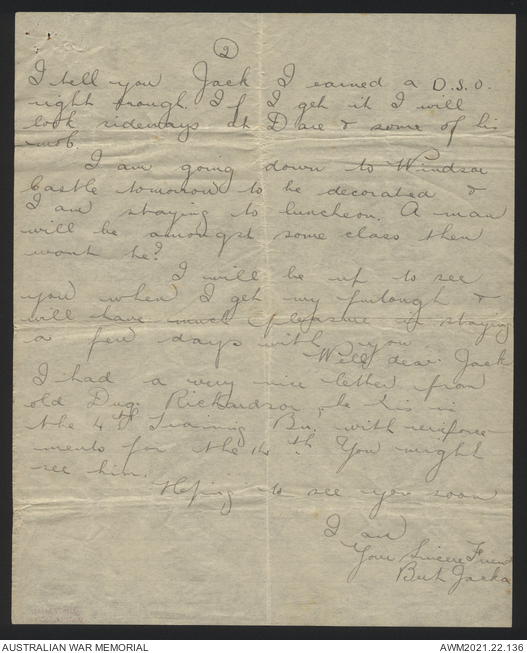 Wallet 1 of 1 - Contains two letters from Albert Jacka to Jack written at the 3rd London General Hospital in September 1916 whilst convalescing from wounds suffered at the Battle of Pozières. In these letters Jacka refers to erroneous reports announcing his death, his promotion to the rank of lieutenant, his recommendation for the Distinguished Service Order (later revised to a Military Cross), other recommendations for members of the 4th Brigade and the Victoria Cross awarded to Private Martin O'Meara. Jacka also makes note of receiving congratulatory letters from Generals William Riddell Birdwood and Herbert Vaughan Cox as well as a personal visit from the latter, and mentions he is scheduled to visit Windsor Castle the following day for an investiture ceremony to receive his Victoria Cross.

During the early morning of 7 August 1916 following a night of heavy shelling, German forces began to overrun a section of the line at Pozières including a dug-out occupied by the 5th Platoon commanded by Albert Jacka. Jacka had just completed a reconnaissance of the situation outside and had returned to the dug-out when two Germans appeared at the entrance and rolled a grenade down the doorway, killing two men.

Jacka escaped the explosion unharmed and exited the dug-out to find Germans forces rounding up around forty Australians as prisoners. He rallied his platoon and charged at the enemy. Heavy hand-to-hand combat ensued and the situation rapidly shifted as the Australian prisoners turned on their captors. The Germans were driven back, the prisoners were recovered and fifty Germans captured. Charles Bean described the encounter "as the most dramatic and effective act of individual audacity in the history of the A.I.F."

During the encounter every member of the 5th Platoon was injured including Jacka, who sustained several gun-shot and shrapnel wounds resulting in serious injuries to his leg, shoulder, neck and head. He was evacuated to England and treated at the 3rd London General Hospital during August and September 1916.

For his actions at Pozières, Jacka was initially recommended for a Distinguished Service Order, a recommendation that was later revised to a Military Cross. This award was promulgated in the London Gazette on 14 November 1916. Many present at the time of the action, and many historians since, have expressed the view that Jacka deserved a second Victoria Cross for his actions at Pozières.