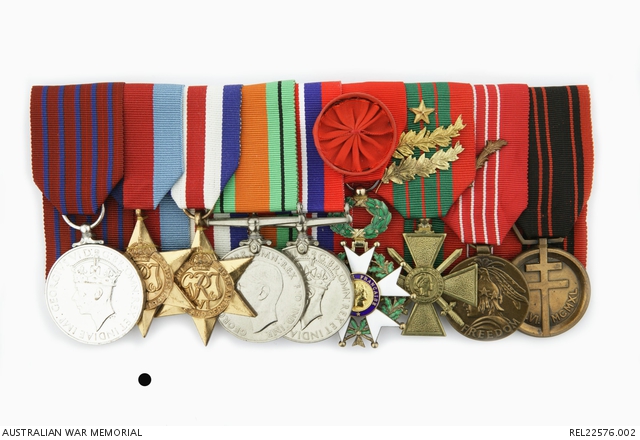 Nancy Grace Augusta Wake was born at Wellington, New Zealand on 30 August 1913 though the family moved to Sydney when she was an infant. In 1932, after receiving an unexpected windfall she left Australia and moved to London then Paris, working as a journalist.

While visiting Marseille Wake met wealthy French industrialist Henri Fiocca. The two were married soon after the outbreak of the Second World War. Following the fall of France, she acted as a courier for the fledgling resistance movement before putting Fiocca's considerable resources to work developing an escape network for Allied soldiers.

By 1943 the Germans were becoming suspicious of her activities, dubbing her 'the White Mouse', and it was obvious that she needed to leave France quickly. Using the underground network she had helped to develop, Wake escaped to England, arriving in June 1943. While in London she joined the Special Operations Executive as an operative to train and equip the French Resistance groups known as the Maquis.

After sixteen weeks of intensive training Wake and a British officer were parachuted into France in April of 1944 for a rendezvous with the Maquis d'Auvergne. For the first time, the Maquis were being properly armed and financed by parachute drops from England, organised by Wake as the 'chef du parachutage'.

Apart from the daily harassment of German troops, the Maquis were trained and organised into first rate saboteurs ready to help cripple the German war machine at a moment's notice of an Allied invasion. Following the commencement of Operation Overlord on 6 June 1944, as the Germans rushed forward to reinforce their lines, the Maquis set about delaying them at every turn. Hundreds of pre-determined targets were destroyed - communication infrastructure, bridges, railways, roads, factories, power stations.

Over the coming days and weeks reprisals were severe as thousands of German troops, complete with air and artillery support were deployed to destroy the Maquis. During one of the encounters, the group's radio was destroyed so that they would not fall into enemy hands. Wake immediately volunteered to organise a replacement though it meant travelling hundreds of kilometres across enemy held territory on bicycle. By the time she returned it is estimated that she had covered over 400 kilometres in 72 hours.

During the celebrations of the liberation of Vichy in September 1944 Wake first learned that her husband had been killed. Fiocca had been arrested by the Gestapo in May 1943 and had endured five months of torture before being executed on 16 October.

Following the war she returned to Paris and worked in the British Passport Control Office before transferring briefly to the British Embassy in Prague. Back in Paris and unsure what to do next she finally returned to Australia, arriving in early 1949 and almost immediately entered the political fray. She twice narrowly missed gaining a federal seat in 1949 and 1951.

Wake returned to London in 1952 and joined the Air Ministry where she stayed for five years. During her time at the ministry she also completed the 'Manual of Combat Survival'. In 1957 she married John Forward, a former bomber pilot and POW in Germany during the war. A couple of years later, she returned to Australia with him and settled in Port Macquarie. Widowed again in 1997, Wake moved back to London where she died on 8 August 2011, aged 98.

For her services during wartime she received recognition from the governments of France, Britain, the United States. The Australian government finally recognised her achievements 2004, appointing her a Companion of the Order of Australia.