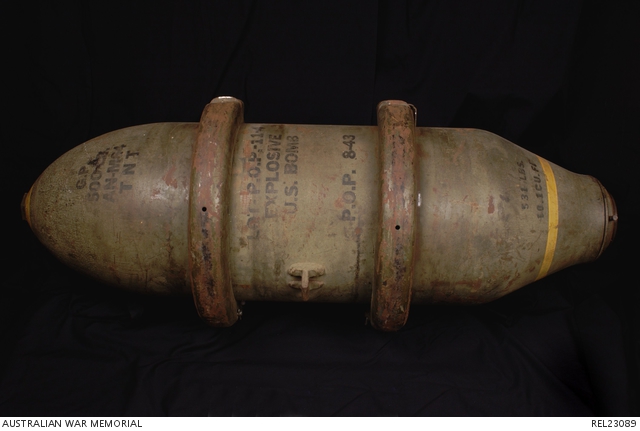 A 500 pound high explosive aerial bomb type AN-M64 General Purpose. These bombs were used to target ammunition dumps, airplanes, railway tracks, engines and cars, There is a nose fuze hole cap inserted. The body is painted in lustreless olive drab, with black stencilling and with a 25 mm yellow band at the nose and a 42 mm yellow band 140 mm from the rear end. There is a tail plug 185 mm diameter screwed into the rear end. These bombs had two types of explosive fillings, either T.N.T., or a 50/50 Amatol and T.N.T. mix. The weight of filling was 262 pound (180 kg). Labelling indicates the actual weight of the bomb is 531 pound (240 kg). There is no tail fin assembly attached. The tail fin would have been of the square box type. Two shipping bands are attached to the bomb. These are channeled to fit over the suspension lugs around the circumference of the bomb, and provide protection for the lugs and a means of rolling the bomb on a hard surface. Welded onto the bomb at the centre of gravity is a single suspension lug. This lug allows for use in British single suspension racks. Diametrically opposite, under the shipping bands, are the conventional US suspension lugs.

The letters 'AN' in the bomb nomenclature indicate the interchangeability between Army and Navy and denotes the presence of the single (British) suspension lug.

The 500 pound AN M-64 General Purpose (GP) high explosive aerial bombs were manufactured in the USA for both army and navy use. They were used extensively by all allied forces during the Second World war.

This is a type example of a Second World War munitions component from the collection of munitions originally held by the Maribyrnong Explosives Factory in Victoria.