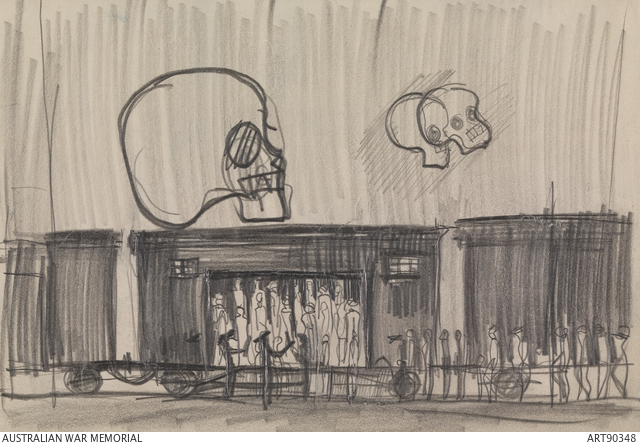 Cattle cars loading human freight at the Kleparow train station for their journey to the gas chambers at Belzec. Kleparow was on the outside edge of Janowska. The harsh black lines surrounded by the skulls, which were the Nazi symbols of death, cast a horrifying and frightening shadow over these images. Before the cars were loaded for Belzec, the Jews were stripped naked and would often spend a day and night standing in the cold waiting for their orders. The skulls of death are insurmountable. When the Jews climbed into the cars, they were whipped and beaten for not getting on board fast enough. When the transports were first introduced the Jews were allowed to remain clothed. This was part of the Nazi guise to dupe the Jews that they were being transported to a better place and that they had nothing to worry about. But, when Jews were seen to be jumping off the cars the SS realised that they needed to make escape more difficult. Thus, the Jews were forced to remove their clothes and anything else on their body which may have assisted their escape. The trucks here are seen as having small windows with divided panes. These windows were later covered with barbed wire and boarded up. Throughout the whole transport process the SS men stood guard. The airless transport often continued for days without food or water. Many people died in the cars just waiting to be unloaded.