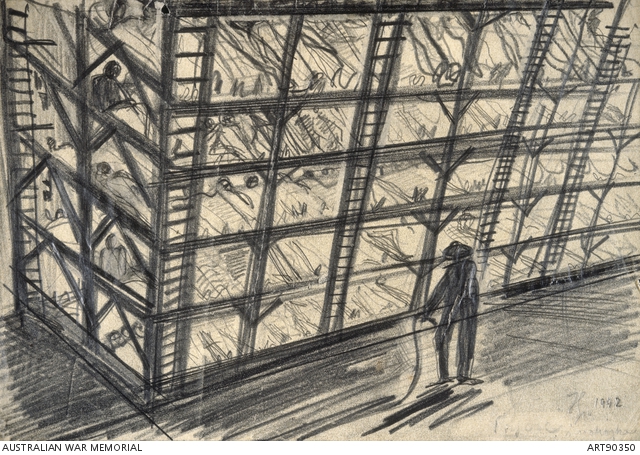 A camp guard standing with a whip in front of the bunk beds in the Janowska concentration camp, Lvov. Janowska's smaller barracks had three-storey bunks and the larger barracks had five-storey bunks with ladders leading to the overfloors. The distance between the levels was so small that it was near impossible to sit on them. The beds consisted of wooden planks lightly placed together. Because the prisoners were packed so tightly, they were forced to rest on their sides. There were no toilets in the barracks. Some barracks had buckets but they soon overfilled. Dysentery and disease was rampant in the barracks as a result of the unsanitary conditions. At nightime the prisoners were forbidden to go out to the toilet. The barracks were patrolled by the Askaris (Polish, Russian or Ukrainian guards) who wielded guns and leather whips. These whips each had pieces of lead sown onto the ends. The back inscription of this work translates as 'Sleeping bunks. The people are coming to get them out and the music plays.' Music was played by the camp orchestra which was made up of sixty inmates who had been professional musicians. Music was played when men went to and from work. The 'death tango' as it was known by the prisoners, was played at public hangings and as the prisoners marched to the execution grounds for shooting. In the lower right corner the artist has dated and initialed his liberation name. The year is 1942.