'A Gentleman in Kharki' and 'The Absent Minded Beggar' vesta holder 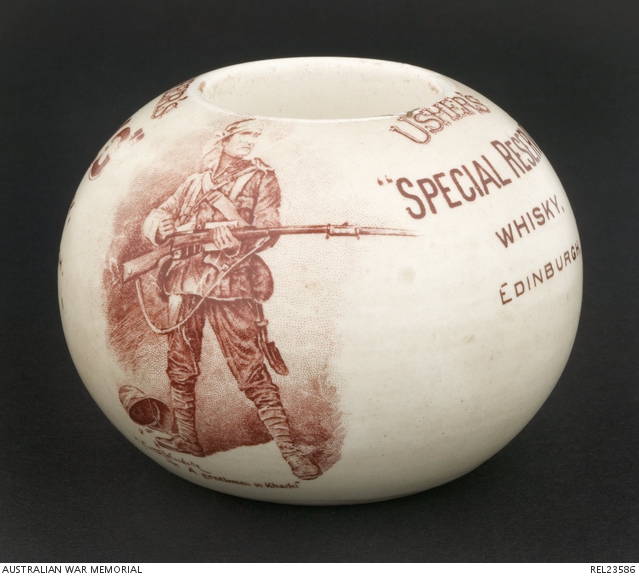 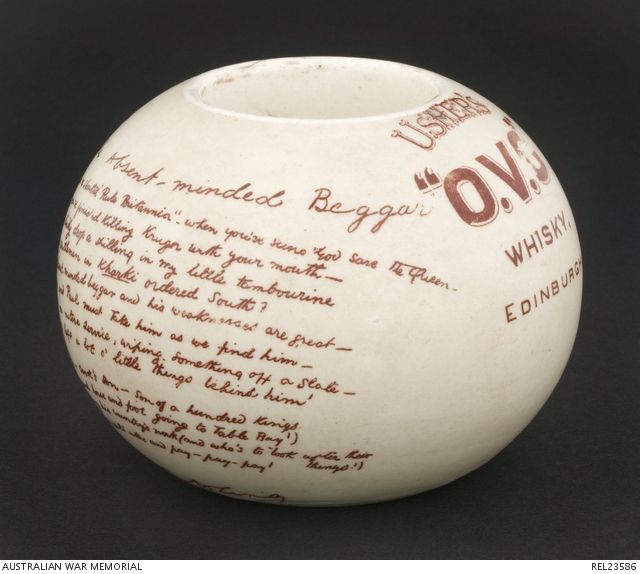 Vesta holder (match striker) for wax matches. At the top is a hole for holding matches. On one side is an image of a wounded soldier, after the painting titled 'A Gentleman in Kharki' by Richard Caton Woodville. One the other side is the first verse and chorus of Rudyard Kipling's poem 'The Absent Minded Beggar'. In between these items on one side is the text 'USHER'S SPECIAL RESERVE WHISKY, EDINBURGH', and on the other 'USHER'S "O.V.G" WHISKY, EDINBURGH'. The bottom of the vesta bears a manufacturer's mark for Raphael Tuck & Sons.

Vesta holder (match striker) for wax matches. The matches would be held in the top of the vesta and the side of the vesta would be struck by the match to set it alight. Because of the smooth sides it could often take several attempts. This vesta has little wear which indicates it was either not used, or was rarely used. This holder was one of the popular souvenirs which depicted the image of the wounded British soldier from Richard Caton Woodville's painting 'A Gentleman in Kharki (Khaki)'. The image was widely used during the Boer War and was often combined with the first verse and chorus of Rudyard Kipling's poem 'The Absent Minded Beggar'. The poem and painting were both created to honour the common British soldier. The poem, set to the music of Sir Arthur Sullivan, was used as a rousing patriotic song to encourage public support for, and contribution to, the war effort.