Sumba Island, near Flores Island. An aerial view of one of the two Consolidated B-24 Liberator ... 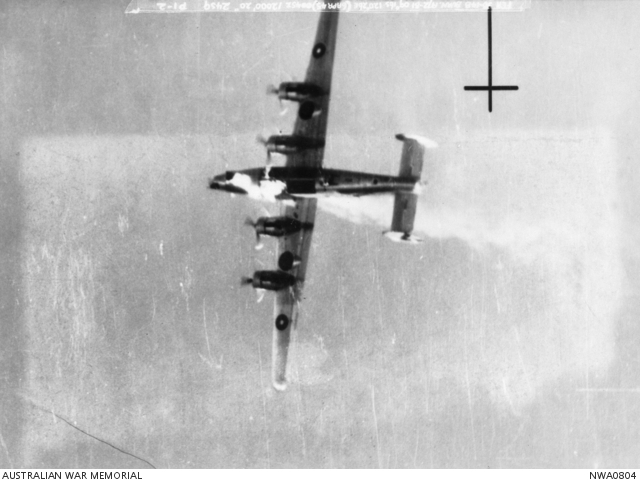 Sumba Island, near Flores Island. An aerial view of one of the two Consolidated B-24 Liberator aircraft of No 24 Squadron RAAF on fire after being shot down by enemy fighters while attacking the Japanese light cruiser Isuzu. The aircraft crashed into the sea, with some of its crew parachuting into the sea, they were eventually rescued by a Consolidated Catalina aircraft of No 112 (Air/Sea Rescue) Squadron RAAF, minutes later the Catalina was strafed by an enemy fighter, it caught on fire and was abandoned. About an hour later a second Catalina arrived and the survivors from the first Catalina were taken aboard. A search for further survivors was made but had to be abandoned as the Catalina was being attacked by two Irvings. The crew on board Liberator A72-77 which was the first aircraft to to be shot down were: Flight Lieutenant (Flt Lt) E V Ford; Warrant Officer (WO) C G Vickers; Flt Lt L DL Crowther; Flt Lt W Laing; Flying Officer (FO) R T Jordon; WO A N Collins; Flight Sergeant (F Sgt) L Raine; F Sgt J M Waddell; F Sgt I Faichnie; F Sgt K J White; Sgt W W Sayer. The crew of the second Liberator A72-81, which was also shot down and crashed were: FO K A Brown; FO P A Mouatt; FO A G Worley; WO K R Shilling; F Sgt L K Walmsley; F Sgt J A Thomson; F Sgt R J Banks; F Sgt T E Bowen; F Sgt A Davis; Sgt W J Wignall. WO Keith Roy Shilling was the only survivor of these attacks.