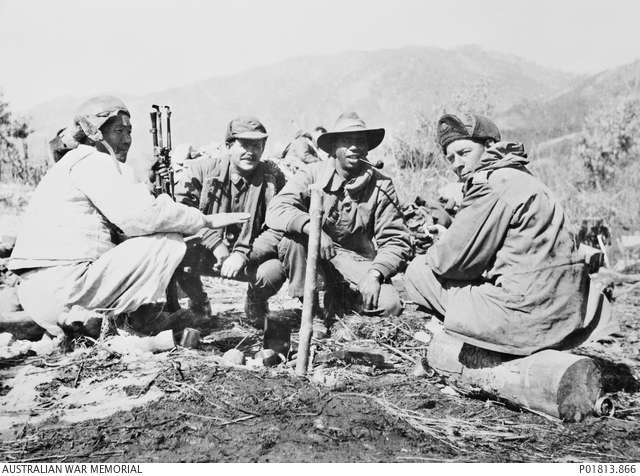 Three members of the 3rd Battalion, The Royal Australian Regiment (3RAR), confer with a North Korean interpreter (left) who is serving with the battalion. The Australian soldiers are (left to right): Warrant Officer (WO) W.J. ('Bill') Harrison, the Regimental Sergeant Major (RSM); 3/37678 Lieutenant (Lt) Reginald Walter Saunders, second-in-command of 'A' Company; 3/46514 Private (Pte) W.H. ('Alby') Alberts of the Sniper Section. The men are gathered around a small campfire on which a billy is boiling. All three Australian soldiers are wearing padded windproof jackets as protection against the cold, while WO Harrison and Pte Alberts are also wearing pile caps. Lt Saunders is smoking a pipe and Pte Alberts a cigarette. The Korean interpreter, who is wearing a traditional fur-lined cap and other warm clothing, is holding a Bren gun. Lt Saunders later became the first Aboriginal serviceman to command a rifle company.