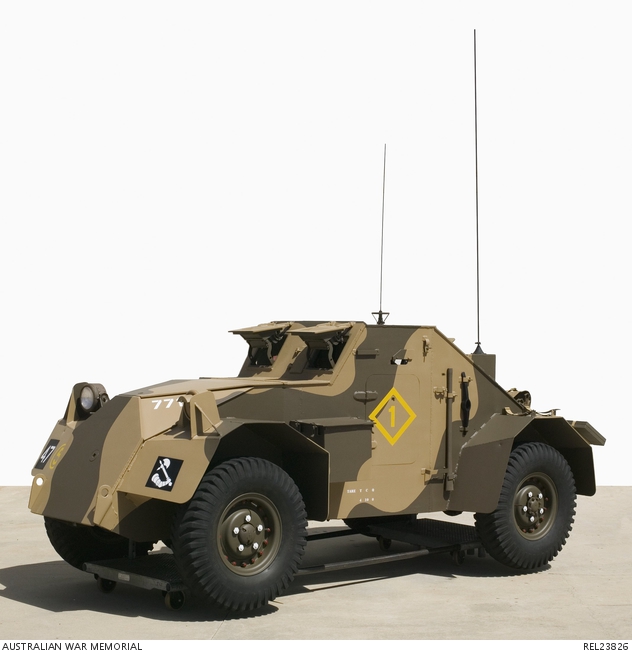 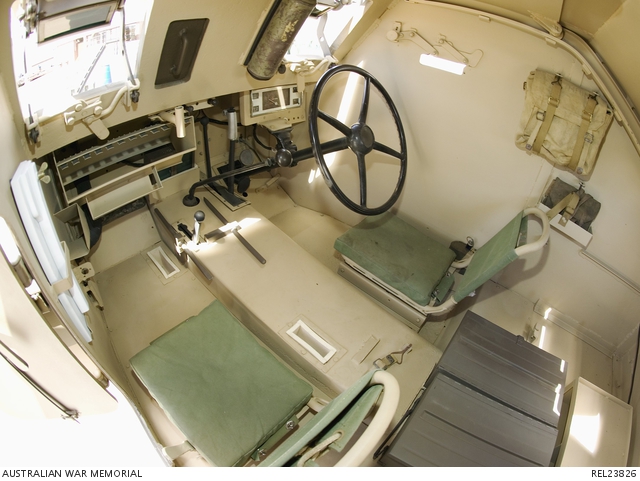 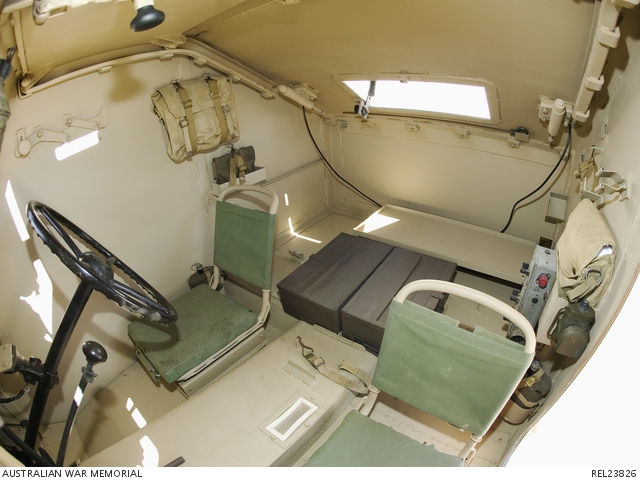 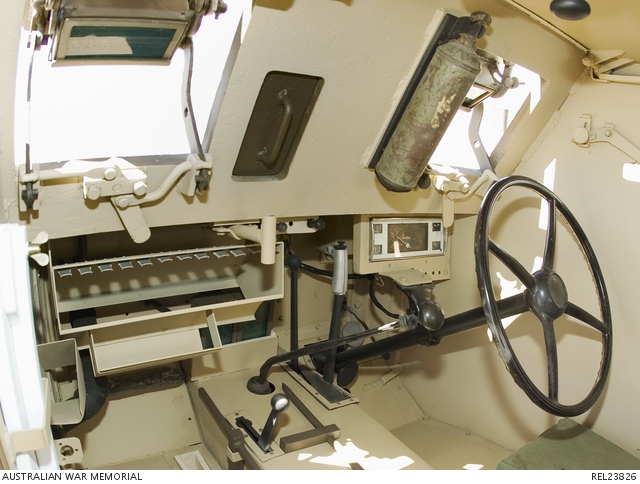 Dingo Scout Car: Cars, Scout (Aust.), Army registration number 77160. The chassis of the Dingo is that of a Ford lorry which has been modified and fitted with a Marmon-Herrington all-wheel drive kit. The wheelbase of the modified chassis has been reduced from 340 to 297 centimetres, and is fitted with a leaf spring suspension system. The wheels of the Dingo are two piece rims. The tyres are designed to operate in a deflated state for a short period of time if damaged.

The Dingo is powered by an 85 horsepower Ford V8 engine which is key started inside the vehicle. An emergency crank starting point is accessed through the front glacis plate. The main gearbox has four forward and one reverse gear and is joined to an auxiliary transfer box by a double uni joint. The auxiliary box has constant four wheel drive with high and low ratio selection and an automatic compensator for forward drive which can be locked out. The engine bay of the Dingo is covered in welded Australian Bullet Proof Number 3 (ABP3) plate armour with additional welded plates as wheel guards.

The upper body of the Dingo is constructed from flat panels of ABP3 armour plate which have been welded together. The crew compartment is separated from the engine at the front, and the fuel tanks at the rear, by bulkheads. The vehicle is accessed by a door in the left side which has an internal locking handle and is opened from the outside by a square key that fits the door latch. Above the door is a vision slit which has an armoured cover which is opened and closed from the inside the vehicle. An identical vision slit is located on the right side of the vehicle. There are two forward observation shutters for the driver and crewman, that can be locked open or closed. When in the closed position the vision slits in the shutters are backed by bullet-proof glass.

To the right of the crewman's observation shutter is a gun port, which is protected by an internally locking shutter. When the shutter is open, the Dingo's primary defensive weapon, the Bren light machine gun can be mounted from within the crew compartment. The crew compartment also has a sliding panel roof, which can be opened during travel to increase observation and ventilation. When closed, it is locked from within to protect the crew from close quarters attack.

An observation shutter is located in the rear of the crew compartment. The shutter operates on a quadrant and has a handle to assist opening and closing. The crew seats are made from metal tubing with leatherette backs and padded seats. The driver's seat can be moved forward and backwards on rails and locked into position. The crewman's seat can be raised or lowered to better assist sighting, when observing through the forward shutters, or using the Bren gun.

The crew compartment has fittings for a Wireless set No. 19 Mk II, rack for storing the Bren light machine gun and spare magazines, rifle rack, ammunition boxes, first aid kit and spare water and oil cans. The two 21 gallon fuel tanks are located at the rear of the vehicle below the rear shutter. The tanks are set into a recessed bay and are covered by an armoured plate.

The 'Car, Scout (Aust) Dingo' arose out of a requirement in early 1941 to equip the Australian Army with a scout car which was locally built, as procurement from overseas was unlikely during the early stages of the Second World War. The design incorporated commercially available components, together with a locally produced all-welded Australian Bullet Proof (ABP) 3 armour plated hull.

A total of 245 vehicles were built between late 1941 and early 1943, when production ceased due to the unsatisfactory performance of the vehicle. Further modifications and development was halted in favour of the imported Lynx Scout Cars from Canada. The Dingo Scout Car served mainly with the Australian armoured divisions as a training vehicle. It had a crew of 2, carried a Wireless Set No.19 Mark 2 and was armed with a Bren Light Machine Gun. This particular vehicle has no known service history.