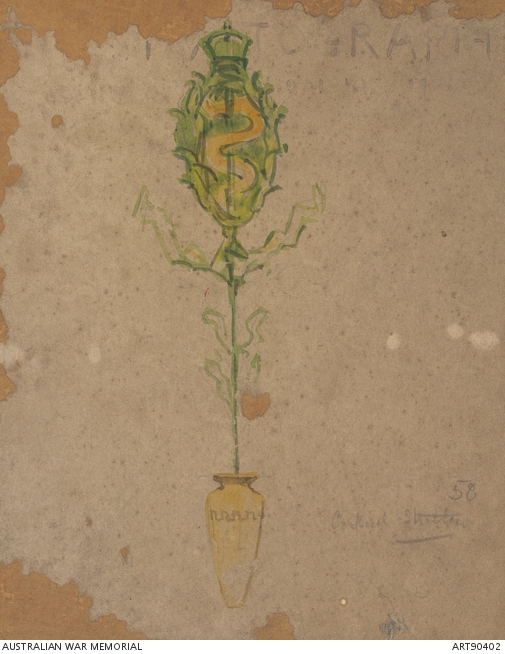 This is a small poster giving details of a performance at Wandsworth Hospital with an image of an urn with a plant coming out which appears to have a shield with crown and serpent entwined in the foliage. Streeton worked as an orderly at Wandsworth Hospital for two years between 1915-1917, during which time he made posters for entertainments at the hospital. This work forms part of this series.

Arthur Streeton is best known as one of the painters of the Heidelberg School in Melbourne in the late nineteenth century. His name is linked with Tom Roberts, Charles Conder, and Frederick McCubbin as responsible for developing in Australia an impressionist technique of painting, and depicting scenes that embraced the nationalistic concerns of the last two decades of the nineteenth century. During his lifetime he was acknowledged as the finest painter of the Australian landscape; he was the first Australian painter to be honoured by a retrospective exhibition in his own lifetime; and only the second to be knighted. In 1918 while based in London, he was appointed by the Australian War Memorial as an official war artist and travelled to France to record the involvement of Australians in the battles taking place along the Somme River. During the period of his employment he produced ten paintings and eighty-six drawings that are held by the Memorial. These were all executed in the years 1918 and 1919. The Memorial later purchased his HMS Renown, Sydney Harbour painted in 1922, and commissioned several large paintings of significant wartime subjects.