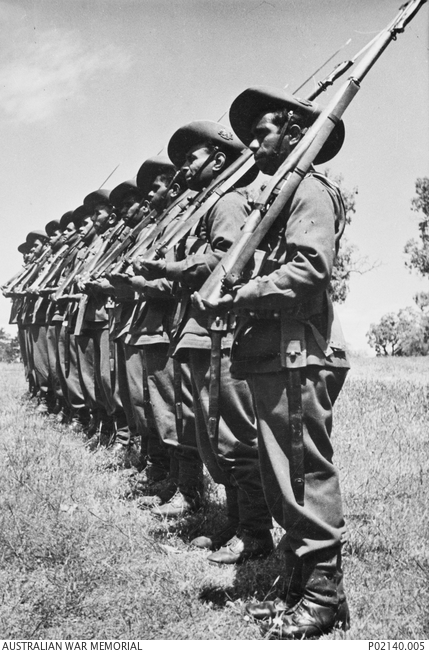 Aboriginal servicemen standing to attention, at No.9 Camp located at the Wangaratta showgrounds in Victoria. These men were mainly volunteers from the Lake Tyers mission, known as Bung Yarnda, by the local Gunai/ Kurnai community, in Eastern Victoria. The men volunteered together, either in the first intake, on 15 June 1940 or the 14 and 25 July 1940. The platoon was based at No. 9 Camp from September 1940 until February 1941, serving with the 2/14 Training Battalion (October) and 2/21 Training Battalion (November-February 1941) before being transferred to 6th Training Battalion – Darley Military Camp (near Bacchus Marsh) in February 1941.
During training, the men were used for publicity campaigns in newspapers and magazines, which wrote of their strength and athleticism, with one local newspaper touting them as “Dinkum Australians”. Despite positive public opinion and media, the military held the stance that only Aboriginal men of mostly European background could enlist and created strict policies preventing Indigenous enlistment. In 1940, the Defence Committee stated that Aboriginal and Torres Strait Islander Peoples enlistment in either the Army or the Navy was “neither necessary nor desirable.” As a result, all of these men were discharged on 22 March 1941, their records stating “Services no longer required: not due to misconduct or discreditable service”. Identified fifth in the line-up is VX48201 Private Samuel Richard Rankin.