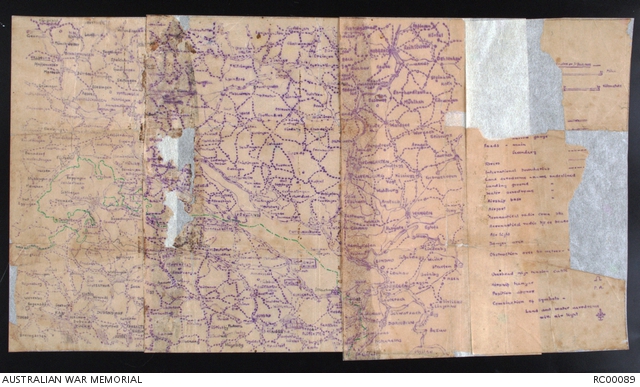 Major Deighton was a British Battery Commander who was captured during the evacuation of Dunkirk in 1940. He was a member of the escape committee at Oflag VIB Dossel, Germany. Due to wounds he received prior to his capture he was unable to escape himself; instead he was responsible for producing maps for other prisoners attempting to escape.

One of the simplest methods of mass reproduction used by prisoners of war was by using a mimeograph. Mimeography is a duplicating process that produces copies from a stencil. In the prison camps the basis for this method of reproduction was gelatine. Gelatine was obtained either from fruit jelly or the jelly from tinned meat from Red Cross parcels.

In Stalag Luft III invalid jellies were obtained from the hospital block, soaked in hot water and wrung through a handkerchief to extract the sugar. The straight gelatine was melted, and poured into flat trays made from old food tins and allowed to set.

A master copy of the map was then traced onto paper with indelible ink, which was made by crushing the lead of indelible pencils. Usually the mimeograph was produced in one colour, with other colours added later by hand.

The master copy was then laid face down on the gelatine so that the ink was transferred to the jellied surface as a mirror image. Copies were made by placing a sheet of blank paper on the gelatine, rolling it and then lifting it off carefully.

The number of copies of a map produced by mimeography varied with the scale of a map. Small-scale maps with fine lines, such as this one, were very difficult to produce, because less ink was used to draw the lines. Therefore less ink was transferred to the gelatine. Prisoners were lucky if they could make twenty-five copies of a small-scale map from one master. Large scale maps of 1:63,360 or larger used more ink and could produce as many as forty-five copies at a time.